Time to take on one of the most iconic characters in all of film history, the King of Kaiju himself Godzilla. For those who don’t know me, I’m a huge Godzilla fan so this is going to be super fun. But before we begin I’m going to explain the “Eras” for people who don’t know. The Eras in Godzilla films are basically their own self-contained timelines. Usually, the only thing connecting them is the original film and of course Godzilla. Currently, there are five eras.

Showa Period (1954-1975) is the first era where all the films were produced before Emperor Hirohito’s death in 1989. While Godzilla starts out as a confused force of nature who becomes the toughest of the Kaiju. What sets him apart from the other Eras is he has…done some questionable things…usually to be kid friendly. The films of this era are as follows:

Heisei (1984-1995) is the second era that reboots the timeline and ignores the Showa Period taking off after the original Godzilla film. Here, Godzilla is back to being a force of nature and Humans are in clear opposition to him. Treated overall more seriously, the kid friendlessness was removed outright in the Heisei era. Films include

Millenium (1999-2004) is the third era and once more is a reboot. Godzilla sticks to being a force of nature but, at this point in time, was the darkest and most threatening he’d be until the Nightmare Era. Films included in this era are

Legendary (2014-Present) is the funny one in that this era is exclusive to America with the 2014 Godzilla film that sets up the Monsterverse and is named after Legendary Studios. Here Godzilla is still feared by humanity and acts like a force of nature but this time in America! Also, it exists concurrently with the next era while sticking to its own universe. So far this era includes

Nightmare (2016-Present) is the fourth alongside the Legendary era or fifth since it released later. Here is a full reboot retelling the original film in a more modern setting and with by far the darkest take on Godzilla to date. While “Nightmare” never appears in the film, it comes from the rather horrific design made by Evangelion creator Hideaki Anno. Like the Legendary Era, there is currently only one film under its umbrella:

Now that that’s out the way, let’s go to the beginning when Godzilla was born in 1954…

Godzilla came in a post-World War 2 world when Japan was still very much reeling from the nuclear bombs that were dropped on them. In response to this, Godzilla was made as an allegory for it and the effects. A giant monster who destroyed everything in his path indiscriminately and left whatever it crossed irradiated and unable to ever be used again (a trait that rarely is brought up in later films). This is the iconic first look where he’s basically a T-Rex with spines on his back and breaths nuclear flames. By the end of the film, Godzilla dies to the oxygen destroyer along with its creator. Ending the poor confused creatures life and ending the threat. That is until the second Godzilla appears.

After King Kong vs Godzilla, his look became sleeker and less terrifying. Also, he got color so that was neat. But then things start to get…well…cartoony…

Yeah, whenever you see a meme of Godzilla doing something insane or outright impossible it’s ALWAYS Showa Godzilla when he spent quite a few movies bringing in the kiddies.

Thankfully, by the Heisei Era they dropped this entirely.

Now comes the Heisei Era which is the first official reboot. The premise is similar here, the original Godzilla died and the second is still out there. But this time he’s not a very kind Kaiju.

This is the Godzilla most people I knew growing up associated with Godzilla. The more defined snout, the properly placed and menacing teeth, claws, the small spines, and the sour demeanor. Heisei didn’t care about mankind and they felt the same. Right down to the fact EVERY film in the Heisei Era is a “VS” film. He was definitely a scrappy Godzilla. Unfortunately, Heisei Godzilla met his end at Destroyah. Going nuclear and dying but allowing his son to grow into the new Godzilla. You know…till the next era begins

Now, this is when Godzilla takes a turn for the dark even by Godzilla standards…

He’s more hunched over now than ever, his scales are visibly sharper, his snout still holds monstrous fangs, and his spines are no longer small and rounded. Now they’re a ridge of jagged icebergs that could probably gut something unfortunate enough to land on them. The design shift here fits the tone of this era where Godzilla has absolutely no mercy for mankind. He is a force of absolute destruction to anything in his path and in some films, is just you know…the SOULS OF THE PEOPLE WHO DIED IN THE NUCLEAR BOMBS ON HIROSHIMA AND NAGASAKI. I mean come on, when you get Mothra, Kiryu, and freaking King Ghidorah working together to stop you there’s a problem.

Now to add extra context. In the Godzilla series, King Ghidorah is a sadistic Kaiju and ultimate nemesis to Godzilla. Being one of the few to both fight him, overpower him, and end matches in draws with neither dying. In the Mothra series, King Ghidorah is also her and Mothra Leo’s ultimate nemesis getting several new forms along the way. The fact King Ghidorah and Mothra are on the same side just shows the monstrous tone shift and threat Godzilla now poses compared to the previous eras.

Now, this is where the Eras split down between American & Japanese Eras. We’ll go chronologically (you’ll see why later) and go with Legendary first.

This Godzilla is the largest of all Godzilla and the bulkiest to boot. He maintains his snout and fangs but also gets a bit more of a realistic edge to match real world reptiles. He has visible gills in this design, his spines are large but more constrained, and his physical structure looks like it could hold his weight. Even when it came to fighting the MUTOs he was the most physical of all the Godzillas, only using his atomic breath once outside of it being basically a Fatality.

This look also gives Godzilla an older feel which fits the story that he’s an ancient creature that got awoken rather than being literally created by a nuclear bomb dropping. He carries himself slower and throws his weight around like an older animal would. The same can’t be said of the final era…

This is a really good movie and I don’t want to spoil it if you haven’t seen it because oh dear Odin you should see it. But if you have or don’t care then well…Keep going down until you see a gif about it being safe.

Where do I even begin with this? His design got an almost complete overhaul to fit the newer tone. Which is essentially a modernized 1954 Godzilla but instead of WW2 nukes it was an event similar to the Fukushima Daiichi nuclear disaster where nuclear waste tainted the ocean and made Godzilla. Now he’s an amalgamation of tons of different smaller bio-organisms and rapidly evolves. We never get a clear view of the first form but we do get a clear and hilariously off-putting look at the second form.

Look at those cute lifeless unblinking eyes. That cute shimmy he did with his legs because his arms were horribly underdeveloped. If it weren’t for the grotesque skin tone, unclosing mouth, jiggling gills, and you know…bleeding gills it’d be cute. He is painfully underdeveloped and totally won’t be able to stand upright and support his own body weight.

Or…maybe he’ll be able to…He’s finally got arms but he’s still struggling to move. But the evolution doesn’t stop here.

He’s finally looking like Godzilla now…kinda. His overall weight distribution calls back to the Showa era with him being a bit bottom heavy but in a blatant attempt to one up the then largest Godzilla ever, Legendary Godzilla, they made Nightmare Godzilla even larger. His tail is quite possibly the longest too. In the past, his skin/scales were said to be designed after burns/cancer skin but here it looks the most obvious and painful. The parts that aren’t black are glowing red. His eyes are unblinking and never focus on a single target and even his spines which are traditionally seen as solid bone or rock appear to be made of the same material as his skin. And it doesn’t end there. 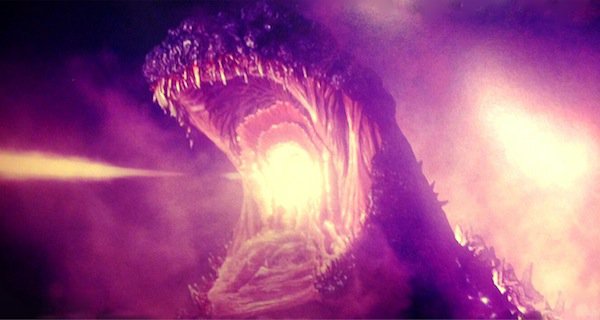 If you pay close attention to the bottom of his mouth, his jaw actually splits open. Just watching the entire Atomic Breath scene shows exactly why this Godzilla has such a monstrous design. He’s hunching over and spews out a cloud of smoke that covers the city before it releases into a sea of flames that eventually coalesce into the purple Atomic Breath that outright cuts through buildings. All through the process it comes off he’s in pain and his theme song really sells that fact.

Now just imagine that scene playing with the song above and you get for the first time in history, Godzilla’s atomic breath not being something to celebrate and enjoy. It’s just a hellish unstoppable wave of destruction that brings fear to mind. Combined with his look, Shin Godzilla has returned to the originals warning about the absolute destructive force of nuclear weaponry while showing it more clearly than they ever could’ve before.

Also, he can shoot atomic beams from his spines and tail. He is literally so full of holes his atomic breath can’t be contained.

Now we’ve officially covered all the looks of all the Godzilla’s with some interesting history attached too. But now or what some people might’ve been expecting.

Yeah, that’s not Godzilla. I mean it is and isn’t. While it started out as Godzilla, Toho bought the rights and rebranded him as Zilla. He’s even appeared in Godzilla Final Wars

But aside from this, theIDW comics have also followed this and made Zilla wholly separate from Godzilla.

With that said, I’ve nothing else to say about Zilla. This Design Evolution is done so catch ya’ll next time!