This time on Design Evolution we’re gonna cover the star of one of my favorite game series of all time, Megaman. But we’re going to do this one a bit differently than previous Design Evolutions. Rather than going chronologically by game release we’ll go chronologically for the in-game universe. Something you’ll find has been consistent throughout the series whether or not they were released where they fell in the previously mentioned timeline.

In the year 200X, Dr. Thomas Light created the first robot with full-blown artificial intelligence in the form of a son named Blues. But when Blues had a faulty power supply he fled thinking the repair process would eliminate his personality. So Dr. Light started over again with his second son Rock and his housekeeper Roll. Eventually designing 6 other robots who would be converted by Dr. Lights disgruntled lab assistant, Dr. Albert Wily, to the side of evil. To deal with this, Dr. Light converted Rock into the super fighting robot, Mega Man.

Despite the questionable box art, Classic Mega Man’s design has been consistent over the years. Being designed to be a son/lab assistant first, the only part overtly visible as being a robot was his trademark blue boots. But when he became Mega Man you can tell he had a bit of a rush job done to him. The only difference being the Buster Guns replacing his normal arms, a helmet, some undies, and cyan tights. A design choice that matches the Robot Masters of the time.

Overall, the Classic Series designs are essentially cute mascots gone rogue. Much like the story. It wouldn’t be until Super Smash Brothers for 3DS & Wii-U that he finally got a design update.

It’s subtle but his armor and his chest have gotten seams added to them. The way his Buster Guns reform in-game to retract his hand, turn into the aforementioned Buster Gun, or use any of his other weapons are also shown in detail to really sell the robot part of his design.

In the year 20XX, Mega Man X is the final creation of Dr. Light that was discovered by Dr. Cain. He’s used to as the base to create the Reploids or replica androids. With free will and their own personalities, they are the true evolution of the original robots from the Classic series. But they soon go rogue or Maverick and the Maverick Hunters are created. But after their leader, Sigma, has a fateful battle between the awakened Zero (Dr. Wily’s own ultimate creation) he goes rogue and the Maverick Wars begin

X is quite literally what Mega Man would’ve grown into if he could age. The design is near identical with the blue armor on his feet and Buster Guns over cyan tights. But now his hands are white to give the impression of gloves rather than a single hulking gauntlet. Better conveying where the gun part of the Buster Gun begins. His chest now has blue cerulean armor with attached shoulder pads, a single red gem in the forehead, and angular cyan designs on his helmet that emulates eyebrows and gives him a more serious appearance. A contrast to the cute and rounded design around Classic Mega Mans eyes. X, in comparison, gives the impression of a much more combat-ready robot. His armor gives more protection and the added black highlights on his joints give a bit of a more mechanical vibe.

In Megaman X7, X had tried to take the leadership role and a matching desk job. But by X8, he has fully returned to the frontlines alongside Zero and their new partner Axl. This is the first time X will get a redesign. Making him much sleeker and thinner. His bulky oval boots and Buster Gun replaced with a more cylindrical design. It actually gives him more animesque long leg proportions and makes him seem taller. The Buster Gun, now that it’s thinner, looks more focused and precise. Like each shot he makes is meant to count rather than a spray and pray or charge and…explode? He’s become less of a Mega Man 2.0 and more his own man.

Years later in MMX: Command Mission, X has gotten another redesign (Command Mission came out 1 year before X8 in 2004 despite chronologically being after). This time returning to his classic bulky design but taking a much more visual leadership look Signas & Sigma would be proud of. The Cyan under armor was replaced with black and both his boots and Buster Guns got more details. Red and gold added to his elbows and knees. Gold lining the bottom of his feet and joints. White on his ankles, below his knees, on part of his breastplate, and around the nozzle of his Buster Gun. It’d be awesome to see the X8 & Command Mission mixed together but a las, both were one appearance wonders. For now, we leave the X series for a far less…positive one…

This is where the timeline gets a bit wonky. After X6 back in 2001, the Mega Man team split and a chunk of them went to do the Zero Series which came out in 2002. Chronologically it follows the ending of X6 where Zero seals himself away for 102 years. Though you can explain it away that the X6 ending didn’t happen until after Command Mission. In any case, this time the focus is on X. After helping end two wars, X was forced to use his body as a seal. But he left a void that needed to be filled. A Void that was filled by the simply named, Copy X.

Copy X, while technically not X, follows the same design premise as his predecessors. Although being a perfect copy of X, he’s a bit Cell with his views on perfection. He’s essentially an inverse of X personality wise and even his Ultimate Armor conveys it. Hell, his normally blue eyes are bloodshot red. His Ultimate Armors white & gold even contract regular Xs Ultimate armor being black & purple. Calling the classic Fourth Armor (Mega Man X4) to mind. Even the attempt to emulate angels with matching wings are sinister. Being much stiffer and threatening. Protruding from his Buster Gun and multiple parts of his helmet. Giving the feeling he’s just an evil bastard wrapped in a pretty heroes body.

After the battle with Neo Arcadia ended, a truce was eventually made between the Humans & Reploids. But nothing good ever lasts forever Between the events of Zero & ZX, however, the Biometals are made. Basically, a hard drive that lets you become the Mega Man stored on them. In this case, Biometal X stored good ol’ X. 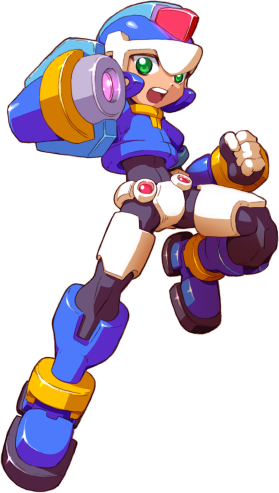 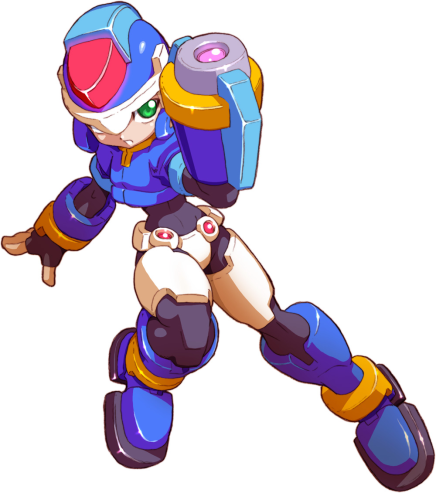 Being that the Biometals are basically saved files, they follow the basic premise for ZX designs which are a modified Zero series design. Sleek armored boots, armored underwear, a vestlike chestguard, helmet, gauntlets, and gloves. The more unique traits come in the subtle details such as the white fingers on the hands to make it look like gloves, armor on the thighs, and gems on the waist armor. It’s an X for the ZX age coming in either boy or girl versions depending on your preference. It’s not much but soon we’ll be getting to the last Mega Bro (We’re ignoring EXE & Starforce because alternate timeline and we’re sticking to the main string).

An unknown time later, possibly thousands of years, the utopia of Elysium is created. The Carbons are created as the next step in Reploids as the last stragglers of mankind die from unknown causes. As the last human dies, Mega Man Trigger goes to follow his last wish but stopped. His body forced to reset back to a baby to recover on the Earth. Hidden safely inside ruins where he’d eventually be found and raised by Barrell Casket. Now being named by his daughter Roll Casket, the newly dubbed Mega Man Volnutt works with them as a Digger.

Compared to all the other Mega Men, Mega Man Trigger (That’s the one I prefer to call him because it’s bloody awesome and he’s my favorite Mega Man) is the most human. Being the only one shown consistently out of armor and that he actually has a human body. Albeit with an interchangeable right arm.

Being an archaeologist type, Mega Man Trigger has the sleekest and thinnest Mega Man Armor of all. Combined with the fact we know that this time it’s in fact armor rather than just his body. With that in mind, they have a form-fitting design. Using cylinders and spheres to make up the bulk of the blue & cyan armor. The helmet is also a first in the series of being optional and functional. Being something you find or buy and don’t have to wear. But doing so will protect you by reducing fall damage. Even most of his promotional art has him going helmetless to show how different he is in comparison. Even so, his design follows similar principals to the others. Blue on the limbs, waist, head, and chest. Cyan on the…connecty bits and black for the joints. In Megaman Legends 2 he just adds an orange square backpack…that’s it so not even worth commenting on beyond that.

No matter the series, Mega Man has always fought for peace in one form or another. From the cute and cuddly mascot forced to fight to the sleek Maverick Hunter turned amnesiac archaeologist. His design has evolved both in real time and in-universe to functionally fit the design of his era and his function. We have Mega Man 11 on the horizon so who knows what post Inafune Mega Men series will have to offer or add on.