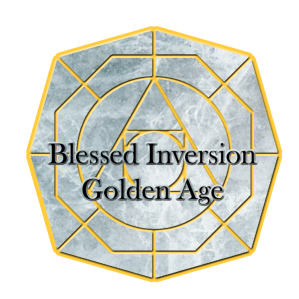 Previously on Blessed Inversion Golden Age…
After finally getting his Inversion Registration Card, Henry “Hal” Sharp the superhero Black Ice, is swept up into a conflict between RajTEK, the Inhibitors, and Pheromaster’s gangsters. Seeing what was at stake, Black Ice proves pivotal in helping to apprehend Pheromaster and most of his allies. Little does he know someone may have been behind the scenes ensuring he joined that battle in the first place…

“Are you sure he’s the one?” a male voice asks.

“If not, we’ll just try again as we have in the past.” another male voice replies.

“Indeed, let’s begin the next test.”

In Silver Plains, Hal lays half-asleep in his bed with Jey by his side. He spent the day prior* trying to make up disappearing** on Jey but after discovering he was an Inversion he found it difficult to rest. He looks at a nearby clock that reads 7:35 AM and slips out of bed. Heading downstairs to burn time watching tv. Cartoons still dominated the morning and always kept his interest. It takes two hours of procrastination before he finally musters the courage to call Steven in hopes he’d be willing to train Jey how to use his powers.

**Rise of the Pheromaster Crossover Event

“Hey, it’s Hal. You know, that cool guy from the other day who helped with that crazy businessman?” Hal replies trying to be vague in case someone tried to listen in from the other end of the phone.

“I remember. Is something wrong?”

“Not really, I just had a favor I wanted to ask.”

“What type of favor?”

“My roommate just had his powers spring up and I was hoping you could teach him.”

“Not that I mind but why don’t you try? You got the hang of your powers on your own.” Steven asks somewhat confused.

“Yeah, but you actually trained people as a job. I kinda just…flailed around angrily until it worked out.”

“I’ll help.” Steven responds after a brief silence. “I’m gonna be at the Superstar Fitness off of Balrog Avenue in about thirty minutes. If he wants to meet me there, he can and we’ll figure the rest out. I’m guessing from the fact you aren’t screaming whatever he can do isn’t violently uncontrollable.”

“Right…Well, thanks. I seriously owe you one.” Hal gives his sincerest thanks.

“Good, because I know how you can pay me back.” Steven’s naturally deep tone goes slightly lower.

“I ran into a new Inversion yesterday. Her body’s made of energy which she can also shoot. She also can fly. I’m in no condition to deal with her and Jey isn’t the only one I need to train. I need you to keep an eye out for her. She’s a little off so be careful. Try to talk her down but if you can’t-“

“I’ll put her on ice.” Hal tries to jest to lighten the mood.

“See you then.” Steven hangs up the phone.

“Score 1-” Hal stops short as his phone rings once more. “Hello?” he answers not bothering to see who called.

“Hey Hal.” a female voice says. Rowena finally decided to call Hal since their last meeting almost a month ago.*

“So you’ve been busy. I see you on the news a lot and that you’re using the name I came up with.”

“Yeah well, that wasn’t my plan.” Hal replies still annoyed at how he got stuck with Black Ice because everyone kept mocking the name Freeze.

“Soooo…” Hal was unsure what to say. Their last conversation didn’t end on the best of notes but part of him still saw her as a friend.

“I was wondering if you wanted to swing by my office later.”

“I wanted to see your costume in person.”

Hal thinks for a moment before responding. “I guess it couldn’t hurt.” he says hesitantly.

“Yeah yeah.” Hal hangs up the phone without so much as a goodbye.

After Jey finally wakes up, Hal gives him a summarized version of his morning before they set out to Superstar Fitness.* Hal had gotten used to skating around Silver Plains with ease. It didn’t take much time or effort for him to get to Gunma Inc. Rowena never specified how he should come so he visited her as he did a month ago. Sneaking behind the building and creating an ice platform up to her main office. But when he arrives he finds she’s not alone. With her were a man and woman in near-identical navy blue suits. Next to them was a particular individual, to say the least. A man wearing a deep green suit worn under a matching open dress coat. A large star symbol was emblazoned on the center of the chest. A sun symbol pin placed on the left breast of the dress coat and moon symbol pin on the opposite. A pattern of planets filled the inside of the dress coat. His long hair was deep purple coloration. But rather than letting it lay flat down to his shoulders, it was tied into numerous spirals like the rings of Saturn. He had an odd posture with his left arm crossed across his stomach, resting on the right side of his hip as it stuck out. His right hand resting on his chin as his head tilted at a 45-degree angle. His piercing green eyes focused squarely on Black Ice as he sat waiting to make his presence known. The look in his eyes could rival Steven in intimidation despite his eccentric appearance.

“What did I just walk into?” Black Ice thinks to himself as he hesitantly knocks on the glass.

“Thank you for coming.” Rowena smiles awkwardly as she opens the window and lets Black Ice in.

“Why do I feel like I walked into an intervention?” Black Ice snarks.

“That depends how attached you are to that costume.” the eccentric man responds in a surprisingly deep voice.

“You’re one to talk.” he fails to contain his annoyance. “Who are you anyway? I thought it was just supposed to be us Ro’.” he turns his attention to Rowena as she walks to the opposite side of her desk.

“Well, I may have left out a detail or two. I did want to see your costume but Carlton & Carlotta, those two lovely suits.” she motions to man and women in the navy blue suits that seemed to blend into the background. “They’re part of my board of directors and had a proposition for you.”

“You can’t see it but I’m squinting suspiciously at you right now.” Black Ice exhales.

“I like your spirit.” Carlton smiles and walks over to shake Black Ices hand. “I’m Carlton Von Oy but you can call me Carlton or Von or even Oy if you liked.”

“Um…Black Ice.” he introduces himself and shakes hands with Carlton. His grip wasn’t particularly strong but the excitement with which he shook hands made up for it. “You can let go now.”

“Charmed.” she smiles with a slight head nod.

“We see great potential in you Black Ice. The people love you after all the good you’ve done for Silver Plains. After we found out you used to work for Gunma Inc. we couldn’t help but feel your departure wasn’t under the best circumstances. So we’d like to extend our figurative hand and rehire you.”

“With a raise.” Carlotta adds.

“That’s generous of you. You aren’t doing it just cause I’m a hero now right?” Black Ice crosses his arms. “Still squinting suspiciously by the way.”

“Not at all my man. Honestly, we were supposed to be doing a collaboration with RajTEK* but they’ve been under literal fire as of late.”

“Instead of waiting on them and having it blow up in our face, I suggested we just try to reintegrate you into the fold.” Carlotta muses. “You’d be getting paid to do what you’re doing already and making sure we don’t end up like RajTEK.”

“Is that so.” Black Ice tries to contain a chuckle. They didn’t realize they were offering him a job he already had. “When would I start?”

“…Dawg?” he says with part of his mask beginning to furl. He couldn’t show the greatest expression through the mask, but he could still show anger somewhat well. “Yeah, I think I’m gonna go.”

Before Carlton can make things worse, Carlotta interrupts him. “He didn’t mean to offend but I’ll be honest. The idea of a personal officially contracted hero is very appealing. Making up for RajTEK not coming through on their promise is also appealing. Your race is, of course, a bonus as well. You’re something we haven’t really seen. The Inhibitors pulled people from across the planet but only one of them is even remotely close to your complexion. Most of Silver Plains already loves you so what do you say. Work with us, represent your culture, and get paid to do what you’re already doing.”

“Great, I can get my job back thanks to affirmative action. Not sure if I should be happy, insulted, or both.”

“I swear I didn’t know anything about this.” Rowena defends herself feverishly.

“Considering you threw me under the bus once before, I’m not so sure.” Black Ice turns to return to the window.

“Wait, Hal, I didn’t call you just for them okay.”

“I really don’t care anymore Ro’. I have actual things that need my attention.”

“What?” Black Ice stops in his tracks and faces Rowena. “How long?”

“About a month.” she replies in a faint whisper.

“A mon-Why didn’t you tell me sooner?!” he shouts at Rowena.

“Because we already asked the police. Not everything needs to be solved by a Superhero.”

“That’s not an excuse. She’s our friend for crying out loud.”

“I know that already you self-righteous dick. What did you want me to say? Stop saving those people in burning buildings and fighting crime to find our one friend who could just be using all her saved up days off and sick days in a row?” she snaps.

“Yes!” Black Ice snaps back. He exhales and puts his hands on his head briefly before lowering his arms again. “I’m going to do what I can. But next time, ask for my help first.”

“Does that mean you accept?” Carlton asks ignoring the vibe of the room.

“About time.” Carlotta passively-aggressively thought aloud to herself.

“I’m sorry if I knew things were gonna go so bad I wouldn’t have invited you.” Rowena sits back at her desk and puts her head down. Her attempts to fight back tears failing her.

“It’s fine, I wanted to gauge the hero.” the eccentric man finally speaks. His stance not wavering through the entirety of the conversation. He gracefully walks over to the window and leans forward out of the opening. Watching as Black Ice skates out of sight. “He’s far more fascinating than I could’ve hoped for.” his thinks aloud as an Astral Manifestation becomes just barely visible over his shoulder.

This work is licensed under a Creative Commons Attribution-NonCommercial-NoDerivatives 4.0 International License.