Injustice 2 #36: Rise of the Supermen

Batman’s plan to save the Teen Titans has hit a hitch. They managed to break into the Fortress of Solitude but now they have to contend with the Four Eradicators. Robotic Supermen only a small step below the original…

In the early stages of Superman’s tyrannical reign, the Teen Titans attempted to stop him and send him into the Phantom Zone. Unfortunately, the youths weren’t strong enough and ended up being the ones forced into the prison. Years later, Batman and his team have broken into the Fortress of Solitude to rescue them. With their help, they hope to stand a chance against Ra’s Al Ghul and AMAZO. But first, they need to find a way past the four deadly Kryptonian sentinels, the Eradicators.

This issue open in the heat of battle. On one side is Batman and his team and the other the Four Eradicators. Steel manages to knock one of the Eradicators away while Black Canary & Green Arrow coordinate to blow the face off of a second. Plastic Man makes his move on a third by slipping inside of its body after ordering his son Luke to protect the non-Meta heroes. Catwoman throws in the proverbial towel and Batman gives the order for a full retreat and regrouping. Luke tries to protect Batman, Catwoman, Batgirl, and Harley Quinn but it doesn’t take long for the three Eradicators to make an opening. Plastic Man makes a last-minute save, destroying his Eradicator, but not before one of the final two grabs Batman. But before the Dark Knight can be broken in two, Mr. & Mrs. Kent arrive and order the Eradicators (even the faceless one) to stand down. 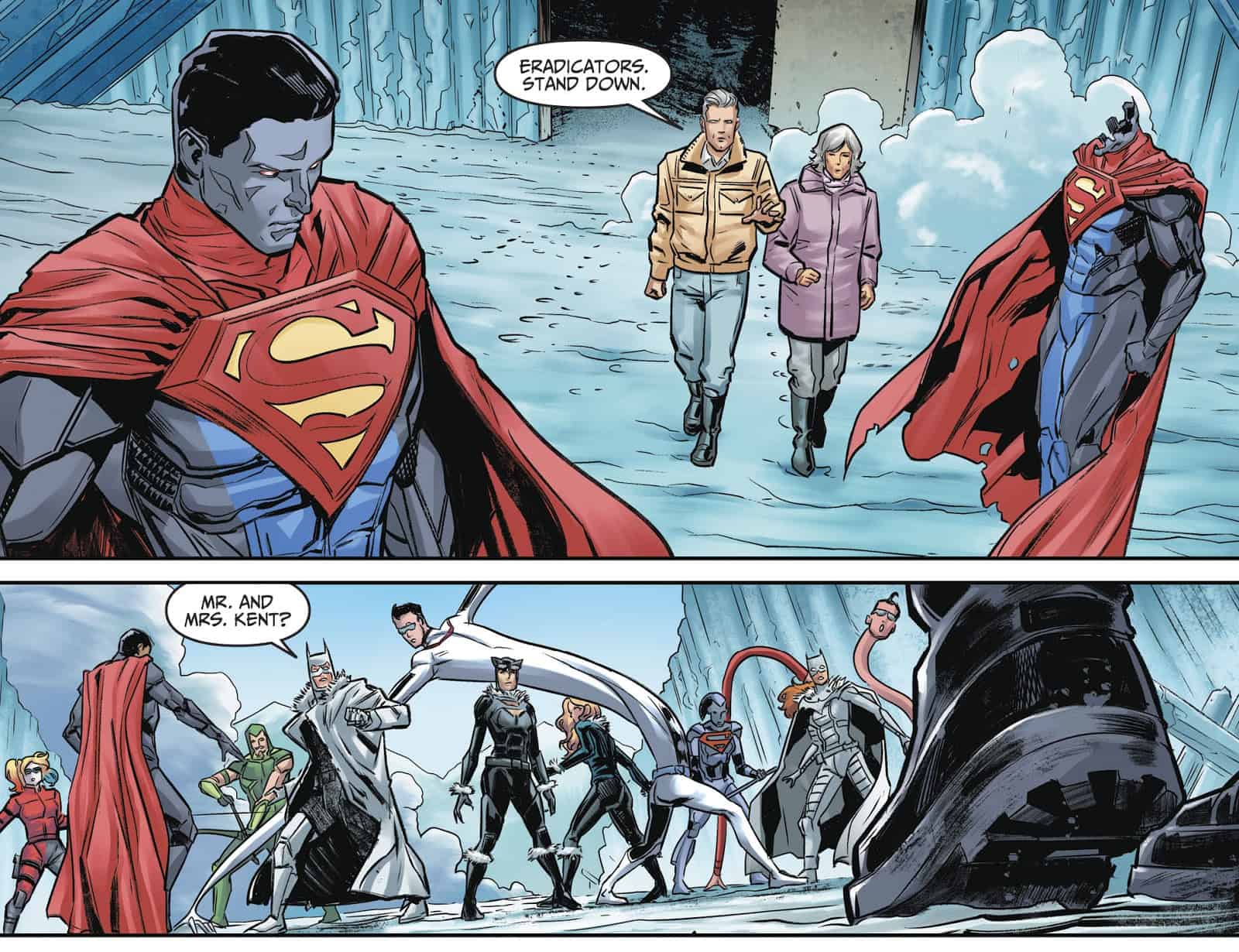 Martha offers everyone but Harley inside for tea, noting with a disgusted face that she isn’t welcome in the Fortress of Solitude. The Kents tell Batman that after everything that happened in Injustice 1 with Superman their farm was burned down and they were forced to move to the Fortress of Solitude. Not that it helped they hid that they found and raised Superman from the government on top of him becoming an eventual dictator. Jonathan asks where Batman was for Clark after Lois died. Batman admits doing what he thought was best but failing him. He’s then corrected by Jonathan who says they all failed Clark. Martha suggests Batman hasn’t fully given up on Clark since he’s just in prison and not executed. But Batman isn’t fully sure himself how he feels. 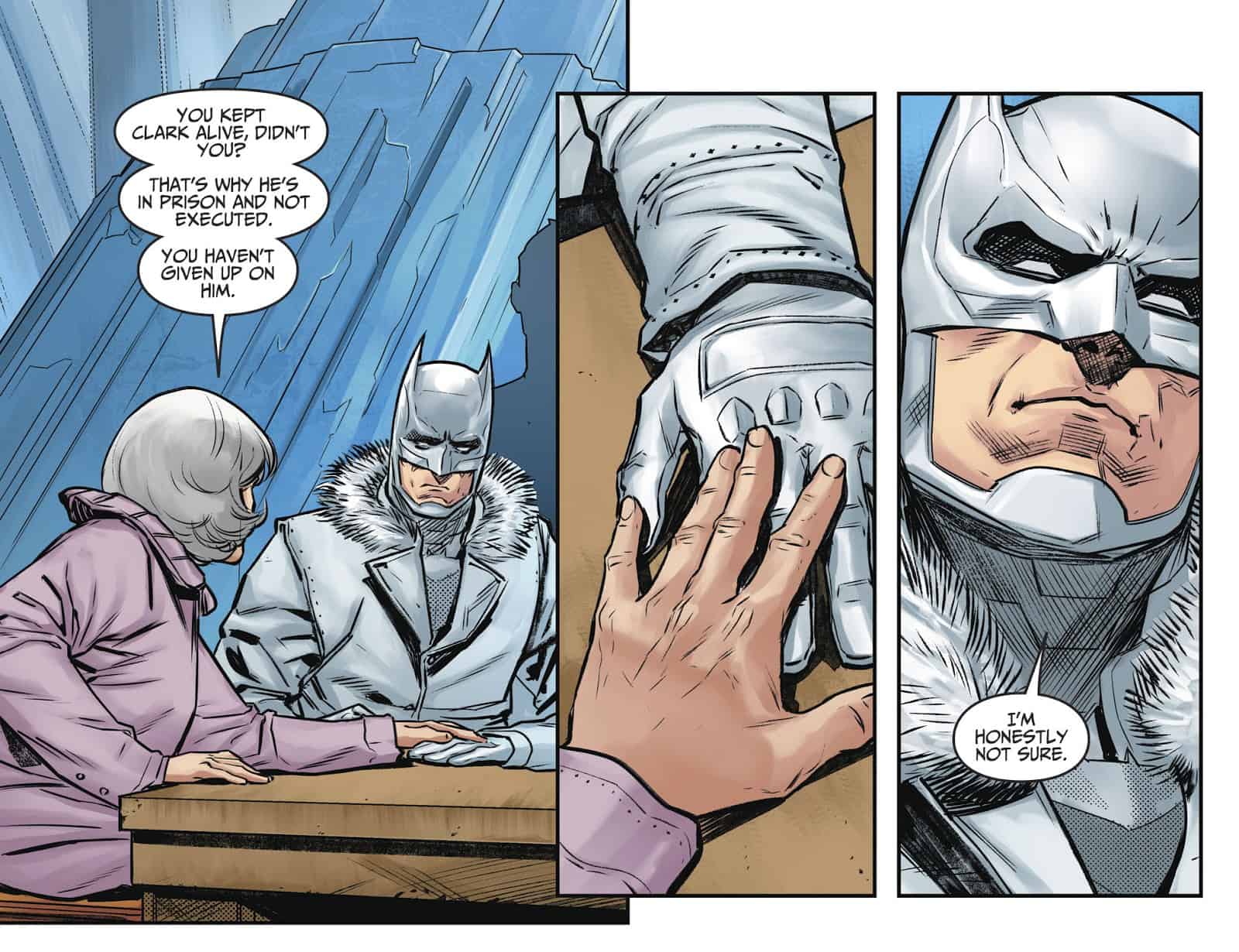 After some pleasantries, Batman explains they came to free the Teen Titans. Jonathan being especially concerned about Superboy. Their plan is to have Plastic Man stretch into the Phantom Zone to pull out the Titans while Luke keeps him tethered. Plastic Man boasts that he’s been through a lot of weird things. But the chapter ends with him stretching into the Phantom Zone and being not quite as prepared as he boasted. 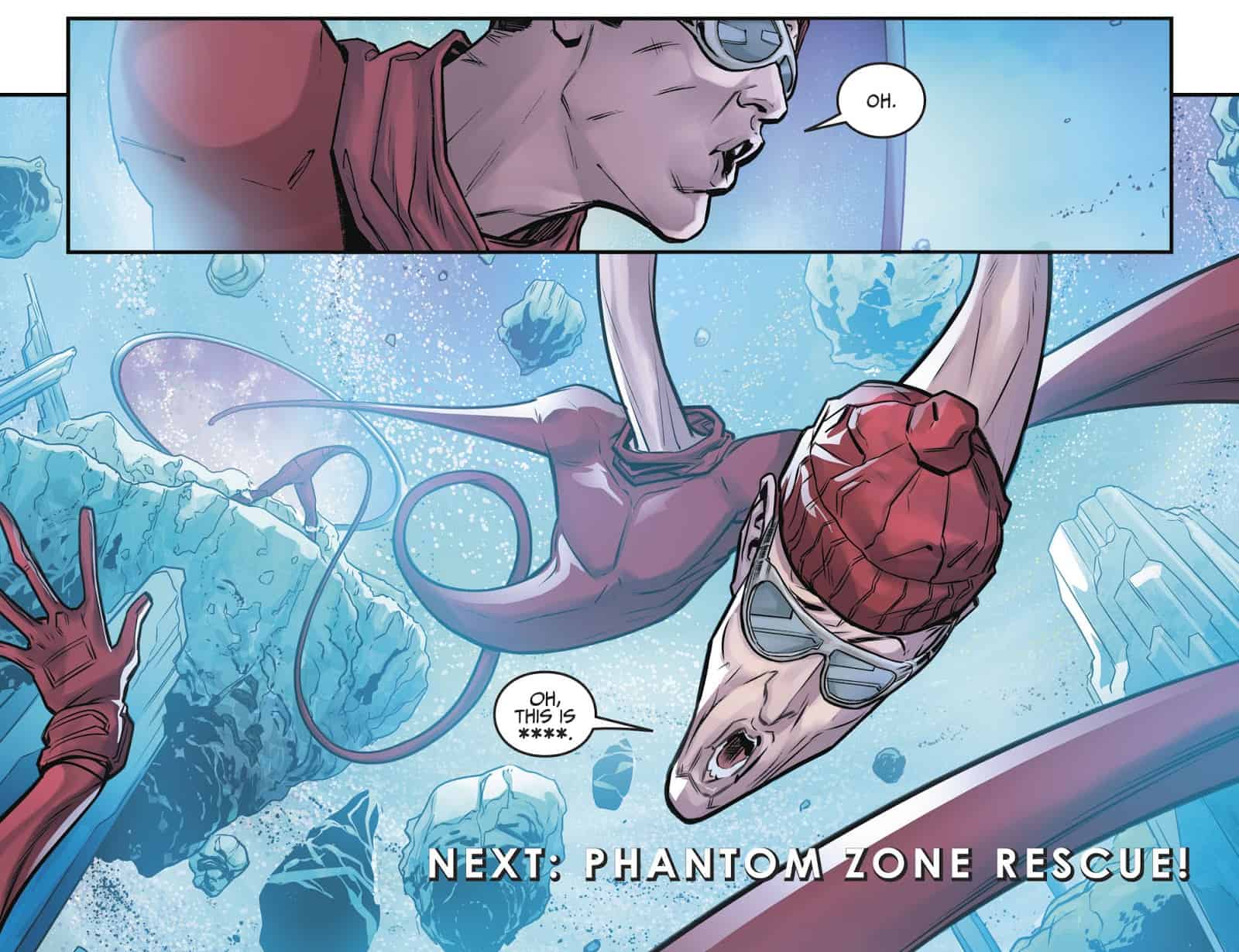 Ma & Pa Kent are still alive and taking up shelter in the Fortress of Solitude and were in control of the Eradicators. And they’re actually about to rescue the Teen Titans. This chapter is doing a lot of callbacks to Injustice 1 which was pretty cool. It’s showing just how much of an impact their actions have had. Like how Harley Quinn, despite being a good guy now, isn’t being forgiven for her hand in creating this universe in the first place.

The Eradicators having paint jobs identical to the character Eradicators costume was a nice touch. Even more impressive is that out of the four only one of them got destroyed. Just showing how despite all their best efforts they really were horribly outgunned. Just highlighting that if they can’t handle these four what chance do they have against AMAZO without the Titans.

Bringing back the long forgotten Kents was a nice touch given the recent references to forgotten characters and events of Injustice 1. It was nice they didn’t have Batmans team actually beat the Eradicators despite being the main focus. Overall it was an okay chapter. You needed to have read the original Injustice comics or have a knowledge of it to get the most out of this chapter though.