Overt-Kill is on the loose as Spawn’s diabolical scheme begins its next phase.

As revenge for the death of Wanda, Spawn concocts a plan to out the demonic underworld as loudly and publicly as possible. Allowing himself to be arrested to further his goal. Eventually culminating in a prison riot. While Spawn follows the chain of command towards a man named “Gideon”, his old nemesis Overt-Kill resurfaces and beats Spawn to the man’s location…

We pick up immediately after the last chapter ends with Overt-Kill easily destroying Gideon’s limousine. All the while accompanied by a narration to set the stage. Specifically, one that claims that outside sources have preyed on mankind’s many weaknesses from the shadows. All with the singular goal of dominating the human race. Unfortunately, with the Dead Zone now sealed only those still trapped on Earth can pay for their crimes at the hands of Spawn. That now after eons; both Angel and Demon alike will be hunted by Spawn instead of being the hunters. The narration continues to explain Spawn’s plan in more detail. Showing that the base of operations Spawn was using several chapters ago was actually taken from an unknown individual. Though it’s left up in the air if that man is alive or dead. That now he’d build up fear in his victims and release it…something Overt-Kill is more than capable of achieving.

After Overt-Kill murders the Limousine drive and gets Gideon at his mercy, we flashback once more while getting more details on Spawn’s plan. Naturally, as a former soldier Spawn knows he can’t win a war against heaven and hell on his own. He’d need men, weapons, and a laboratory. The last one specifically being so he could build Overt-Kill a new pair of legs. Revealing that he knew all along that Overt-Kill was a prisoner and the first steps of his plan were set up primarily to locate and free the cyborg. We then learn that Gideon is, in reality, an Angel trapped on Earth and now Spawns prisoner. Courtesy of his new cybernetic partner. But Gideon remains fearless and claims that both Heaven & Hell will go after Spawn until the Dead Zone is opened once more. But Spawn dismisses it and claims everything being done is a trap and there’s no way he won’t come out on top. But first, he’d have to make a “slight modification” to Gideon and tears off one of his Angel wings. Seemingly done both out of spite and to ensure he didn’t lose his sanity (a side-effect of an Angel losing both wings).

We get a brief scene with high ranked government demons (?) doubling down on keeping quiet about Spawn. That he knows Spawn is planning something and the more they react the better things go in his favor. But we shift to Marc as he’s confronted by Spawn who believes he’s a traitor much to the reporter’s confusion. But Spawn explains his suit never lies when Marc’s girlfriend enters the room. Marc pleads for Spawn to leave her out of things but Spawn ignores him and kills her. Explaining that at some point, his girlfriend had already been killed and replaced by a Demon who used her body as a host. That she was leaking information to their enemies and if he wants to confirm it, he can get her an autopsy and find out Spawn was right all along. That since he met Jim Downings he was a target and should immediately prepare to leave. The next time Spawn visits, he intends to ask him a favor. 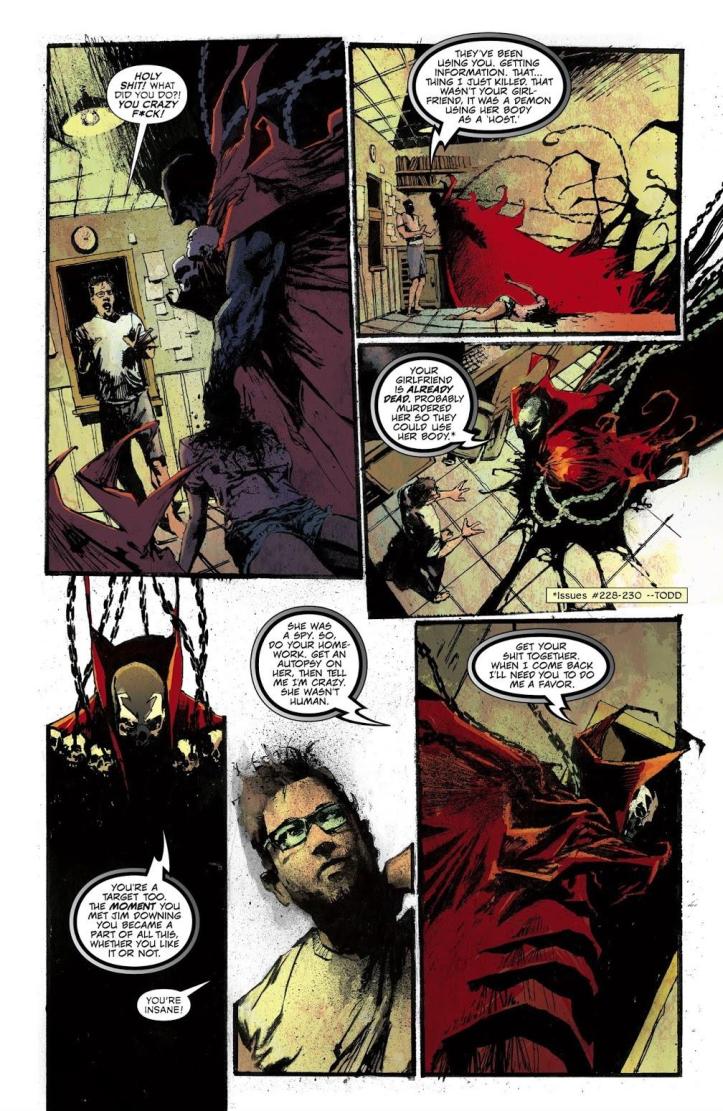 Next on Spawns hit list is the President of the United States who is currently doing an interview of some kind when Spawn arrives. Easily knocking aside the guards and locking the doors with only him, the president, and news crew inside. Spawn asks if he killed the real president but naturally, the man plays dumb. In response, Spawn reveals Gideon’s wing followed by Gideon himself. No longer able to play dumb, the president’s eyes turn red and reveal he is actually a demon. He asks what Spawn wants and he says he wants to know who murdered Wanda. He knows the Fake President isn’t smart enough to be the true mastermind and that other World Leaders have similarly been replaced by supernatural doppelgangers. But now they have no way of covering it up before he takes the news crew and disappears. Ordering them to get as many people as possible to see everything they recorded if they want to live past tonight. To get people to ask why this is happening, and who Spawn and his allies are. The chapter ending when it’s revealed that Overt-Kill isn’t the only rogue turned ally. Cy-Gor, the Curse, and the Freak have all returned after years and all working for Spawn…

I know I suspected Overt-Kill was working with Spawn, but I didn’t think was right. Nor did I suspect that he’d get his old forgotten enemies to come to his side as well. It’s nostalgic to see them all come back in the wake of Cogliostro’s return and gets me excited for other returning relics.

This issue the art isn’t being colored exclusively by Lee Loughridge and it shows. While the stylistic art of Jason Shawn Alexander remains, the use of green for Spawn’s eyes is more prominent this time around. It’s a nice subtle change that helps Spawn look even more sinister.

While it is nice to see Spawn being more tactical, it’s not becoming a bit much. Understanding the way Demons and Angels work after years of facing them is one thing. Being a master of cybernetics and building Overt-Kill a new set of legs is another thing entirely. Unless I missed something over the years, it’s definitely a sudden and unusual skill he learned just to progress the plot. Unless he has another ally we don’t know about yet which is entirely possible.