Gorilla Grodd has reached his limit and it’s open insurrection against Solovar. While they fight for the throne, what will Ra’s and his Suicide Squad do? After returning to Khandaq, Robin (Damian Wayne) confronts Ra’s Al Ghul about his part in the decimation of Williams, Arizona. King Solovars tolerance of the humans finally pushes Gorilla Grodd past his limits. Now Gorilla City is in the midst of an insurrection…

Picking up immediately after the last chapter, with Gorilla Grodd and Solovar rallying their troops. When the battle begins; Ra’s, Robin (Damian Wayne), and Athanasia retreat and reuniting with Poison Ivy. She suggests retreating but Ra’s refuses. He won’t abandon AMAZO and he doesn’t want Grodd as an enemy. With Grodd being so obviously against his presence, Ra’s had already planned for this coup and orders the Suicide Squad to get Dr. Ivo. 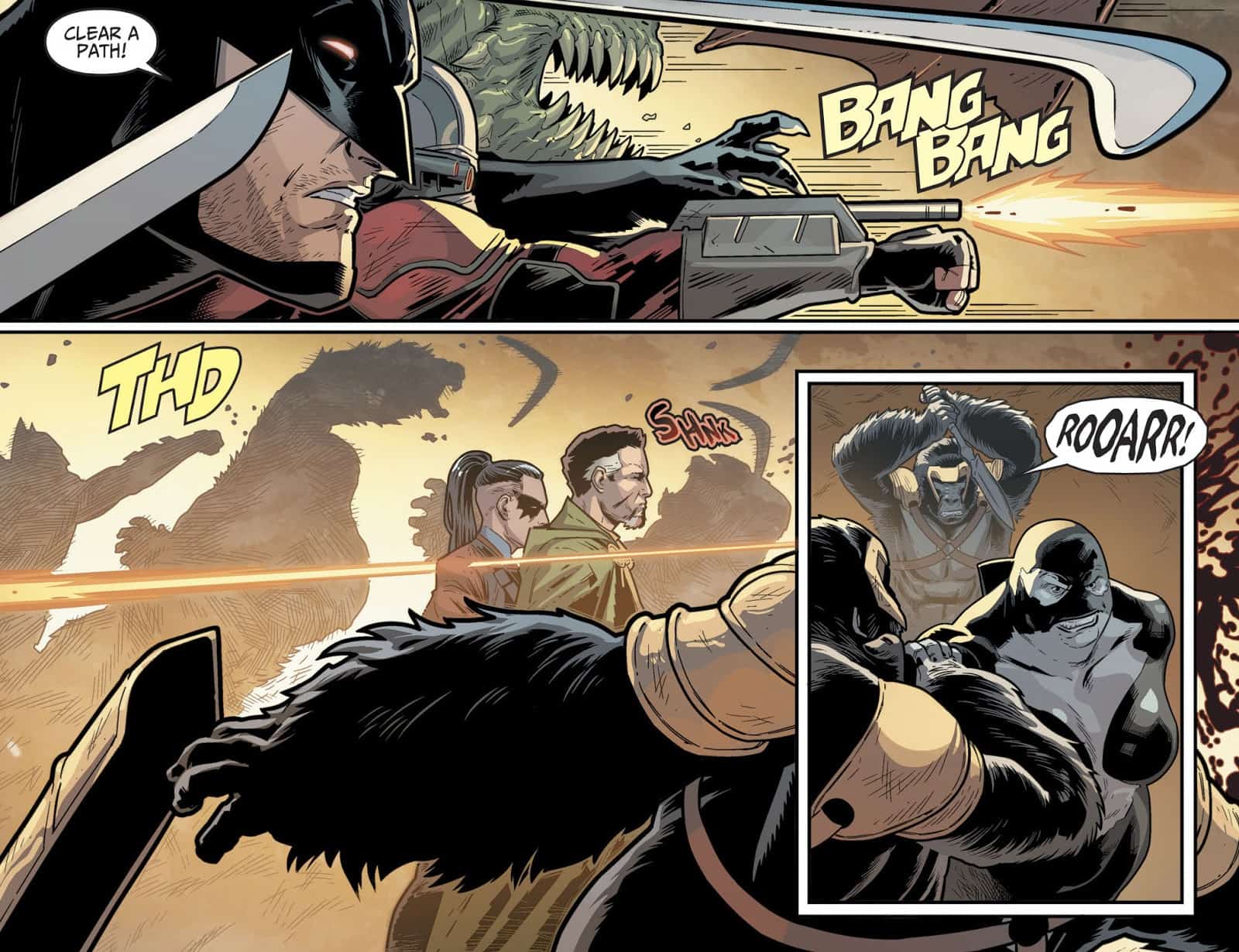 The Suicide Squad easily carves a path through the Gorillas and rescue Dr. Ivo. In a bit of a callback to when AMAZO was first activated, Ra’s asks if a Nullifier is ready. To which Ivo says it hasn’t been tested. That’s all he needs to hear and sends AMAZO to the frontlines. Grodd notes that AMAZO has no mind only for AMAZO to speak and say that he does. Removing Grodds crown and stabbing the Nullifier in its place. 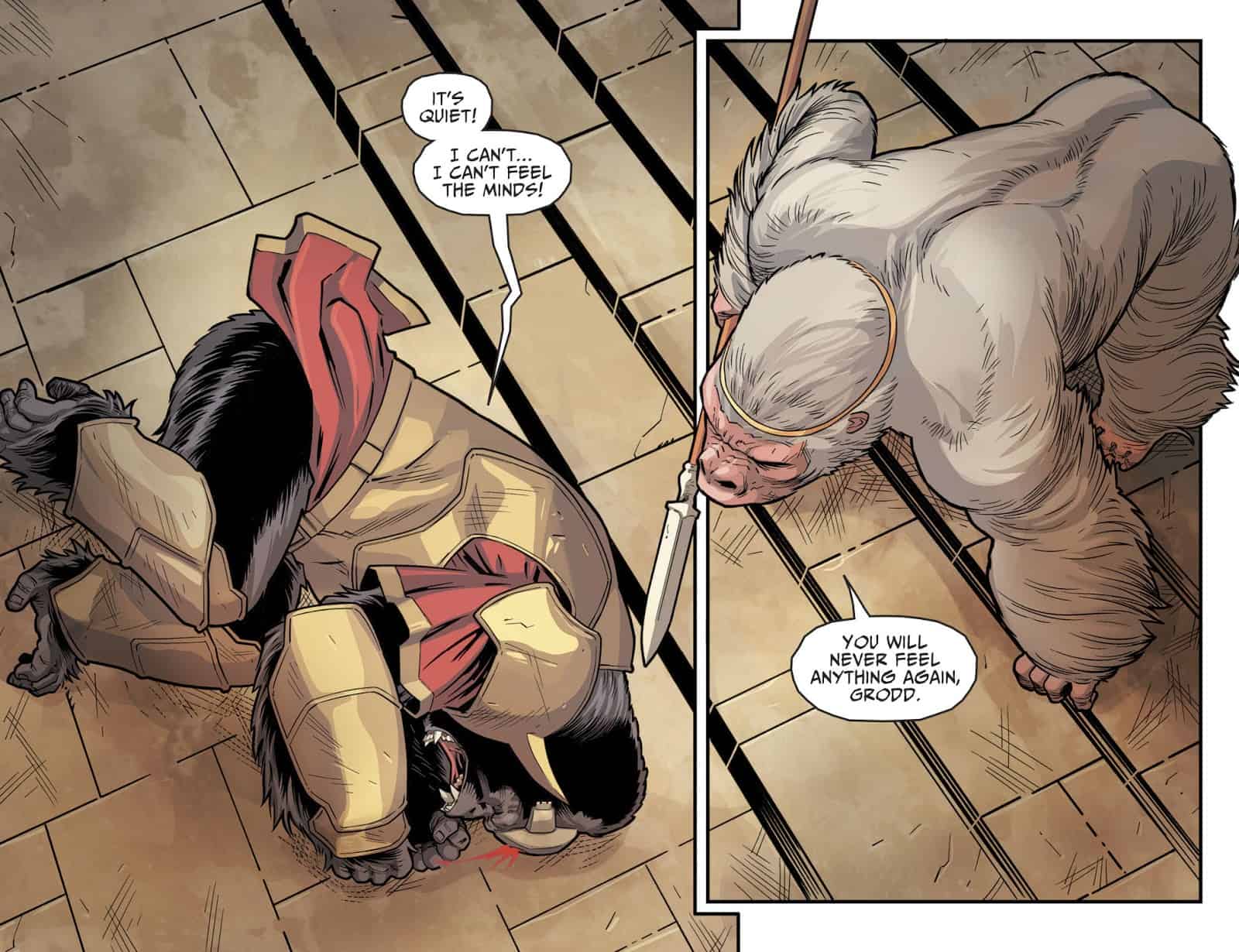 With the Nullifer bound to him, Grodds psychic powers no longer work. Solovar is ready to kill him but Ra’s stops him, sparking Grodd to mock his former King once more. Ignoring this, Ra’s notes that if Solovar executes Grodd he’d just turn him into a martyr. Something that in the long run would be more problematic than a rescue attempt. With his life spared, Grodd questions if Solovar knew about the Nullifier and if Ra’s made one for the King himself. Grodd continues to prod Solovar who exiles him and his army. With the traitors removed, the Suicide Squad and AMAZO now openly on display in a show of force, Solovar sends out AMAZO once more to destroy a human city. 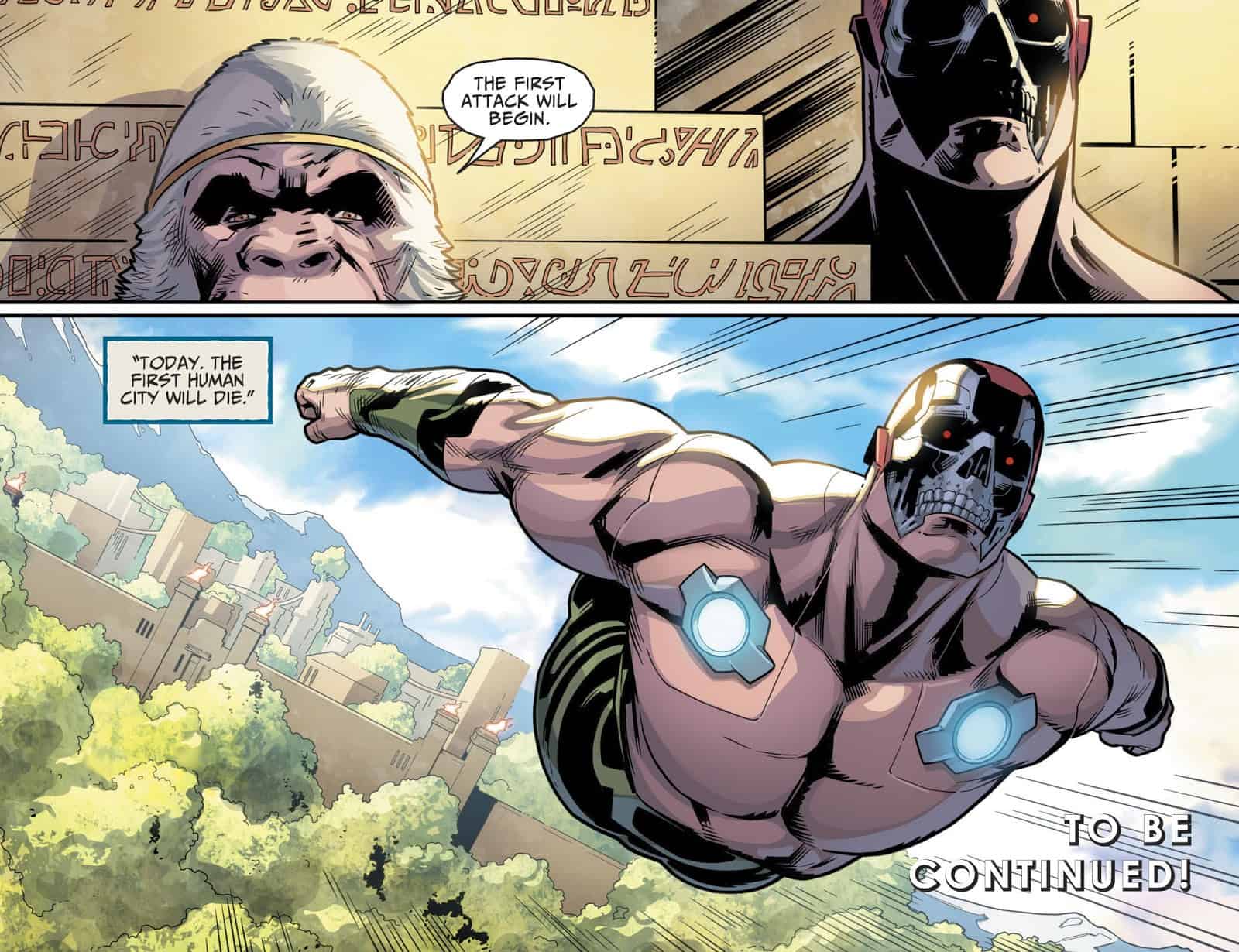 Canon and common sense have saved Grodd from a very painful execution. This was one of those moments where tension was removed a bit because we know this is a still a prequel/interquel comic. The Suicide Squad remains a bit of comedy relief with Orca being pregnant, though it did give us a cute scene with Croc saving her. Dark Batman made a brief return after being absent for some time so it’s good to see he wasn’t forgotten. It was interesting that out of all the military conflicts they’ve had thus far, this was resolved almost laughably quickly. Usually, you’d expect to see an event like this drawn out but sometimes, an insurrection won’t even make it past the front gate.

Final Thought: Another good chapter that surprisingly gets right to the point. The art remains good and the wording of Solovars final line sparks some curiosity. Is the first Human city being used in a literal sense, is it just implying Solovar plans to go scorched earth with every Human city and it’s just first in line? Or the more likely possibility it’s just both and we’re gonna see even more massacres before someone finally stops AMAZO.