What You Need to Know:
In an attempt to protect Cyan, Spawn brought her to live with a family in Japan away from the forces of Heaven & Hell. But his plan backfires horribly. Cyan is captured and the family she was living with all killed. Driven by fear and the emotional strain, Cyan takes a powerful drug made by the Demons and destroys both the man in charge and the facility she was trapped within…

What You’ll Find Out:
With no reason to remain in Japan and his mission a resounding failure, Spawn & Cyan fly back to the United States. Spawn breaks the awkward silence between them to bring up the issue they’ve been avoiding. Neither can share what happened and need to know what they’re going to tell Terry, her father. Cyan believes Spawn wants to lecture her and that she’s no longer going to listen to him. She was the one who saved herself without any training and is convinced she can handle whatever comes. Cyan leaves to go to the bathroom but disappears for 15 minutes. Spawn prepares to look for her when she reveals herself having returned already while invisible. She’s willing to listen to him for the duration of the flight but after that, she wants time to herself. Eventually, they arrive at the airport and Cyan is reunited happily with her family. Terry is surprisingly not mad at Spawn for once and just glad Cyan is safe. Before they leave, Cyan gives Spawn one last hug and says she won’t forget what he did for her. They return home while Spawn pays Cogliostro a visit. 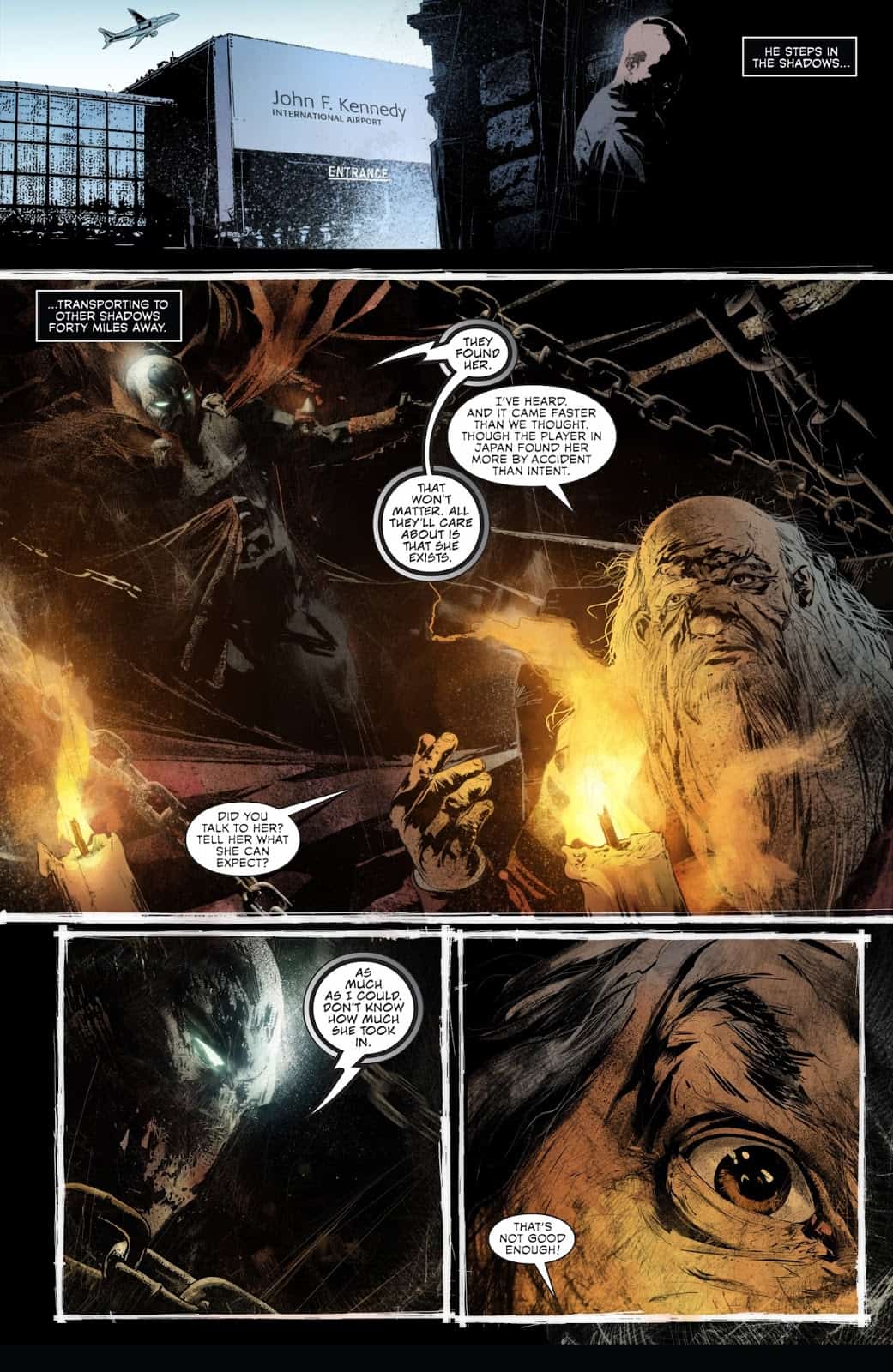 Cogliostro reveals that it was a coincidence that the demons in Japan found Cyan. But now that Hell knows she exists, they’re going to be coming for her. He chastises Spawn for not better preparing Cyan. Cogliostro reminds Spawn of the strife he went through from Hells unrelenting pursuit. Spawn just says he already talked to Cyan and will make sure he gets to the Demons first this time. Leaving shortly after for his new home, which is hidden somewhere in an upstate county. His new home is far better prepared than his old apartment and he uses its multi-monitored computer to research. Stopping his search when he discovers the rapper Bonz, who he captures publically outside of a club while it was recorded. Throwing him into the backseat of his limo and disappearing into the darkness. In classic Spawn fashion; CNR, I News, & 42.1 KWDR return (albeit with new stations this time) to comment on what occurred. 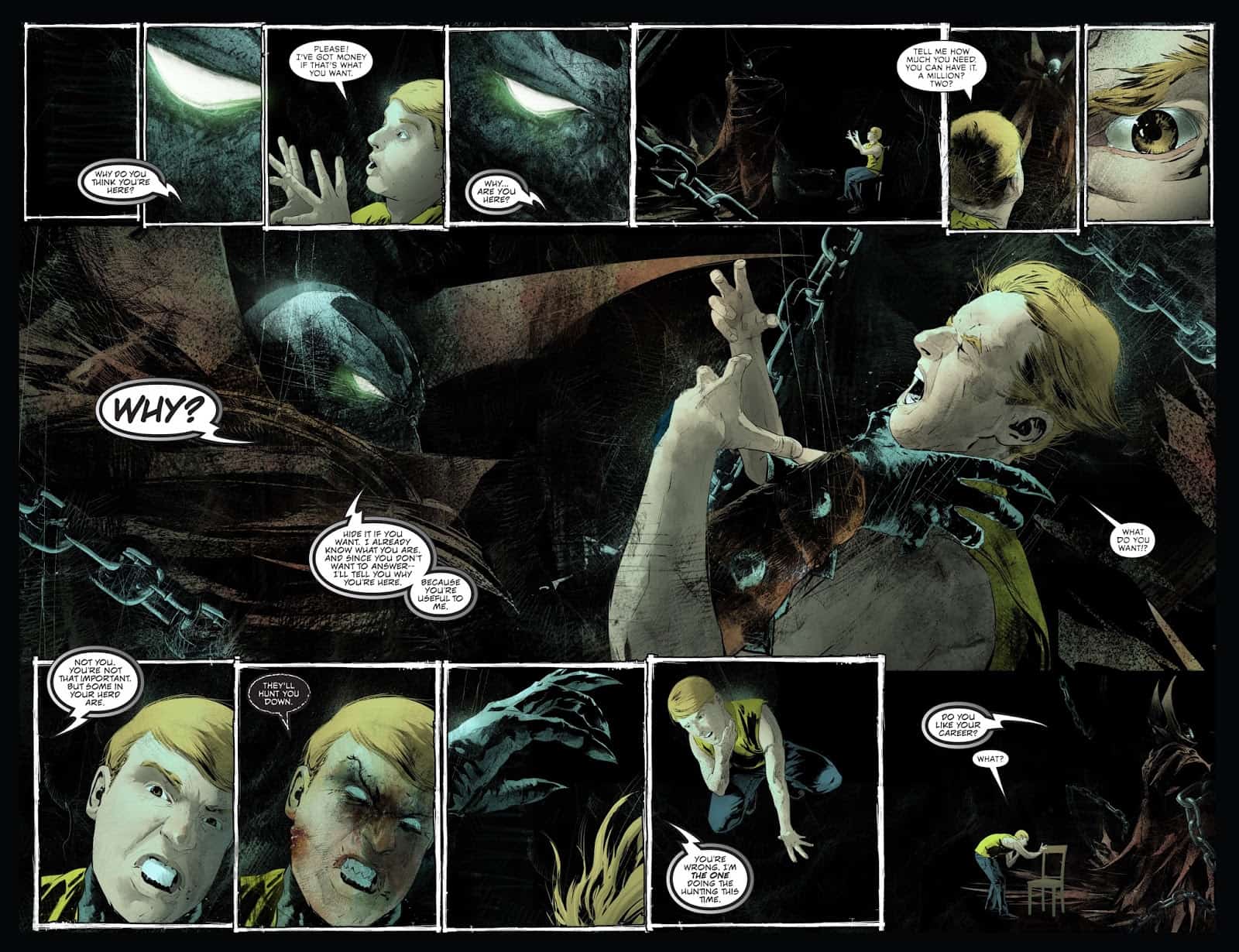 It turns out Bonz was, in reality, a Demon. Spawn threatens Bonz fame and fortune to get his assistance. Spawn reveals they’re in his computer room and that he just wants Bonz to keep doing what he’s already doing. Bonz has no objections and the pair teleport directly into Times Square. The crowd is so blinded by their love for Bonz they don’t realize Spawn is there or even care. All but the police that is, who orders Spawn to freeze. Bonz tries to warn the cop but Spawns cloak latches onto the gun and pulls the cop towards him while the world watches. Spawn has a message he wants the cop to deliver and disappears as suddenly as he came after whispering it to him. Leaving the cop understandably confused about what happened. 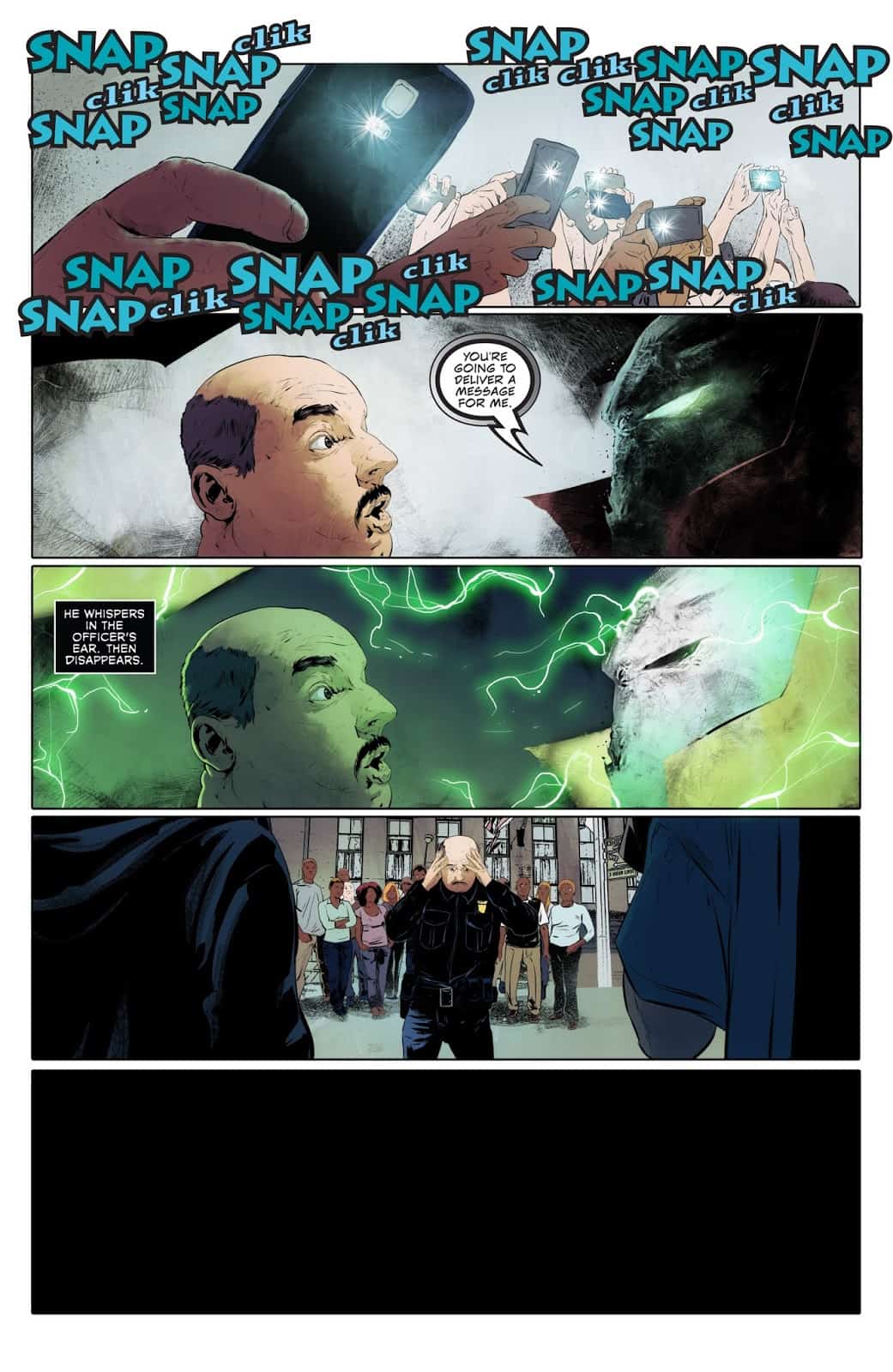 What Just Happened?
At long last Spawn has returned to New York and made himself public. Something he hasn’t really done since…well since Youngblood was still part of Image and Spawn actually interacted directly with the Superhero side of Image. He’s also moved to a new house which makes sense with protecting people and having his costume back up to code. But it leaves a few questions open. Like what about his old friend Earl and all the weapons in his old apartment? Is Ant just being forgotten entirely? I didn’t expect Spawn to just go right back to them but I’m also getting the vibe they’re being pushed aside like a bad dream. Something that unfortunately has happened in the past with Spawn due to rights issues.

The tone has shifted from the aptly named Dark Horror Arc and the art reflects it. Being stylistic in ways but still a clear picture. Spawn, similarly, doesn’t look as sickly and thin. He’s back to his more overtly masculine look and shrouded in either ambient shadow or his own cloak. Every single image involving Spawn is amazing. Special note goes to the page where his chains overlap part of the panels for extra effect. It was also a nice and interesting touch to see the three newscasters come back once more but with new original channels. I’m not sure how long this change has been around but this is my first time noticing it and I approve.

Final Thought: It was a really nice classic style of Spawn that seems to be building to something Spawn hasn’t ever done on his own choosing. Doing things openly in daylight. Sure Jim Downings did out of costume but in costume, this is unheard of. I’m honestly curious what he’s planning to do where this is his best idea.