Injustice 2 #46: Two Atoms are better than One

Sometimes you need to change your perspective to deal with a problem. Will the microscopic viewpoint of Atom be the key to stopping Amazo? 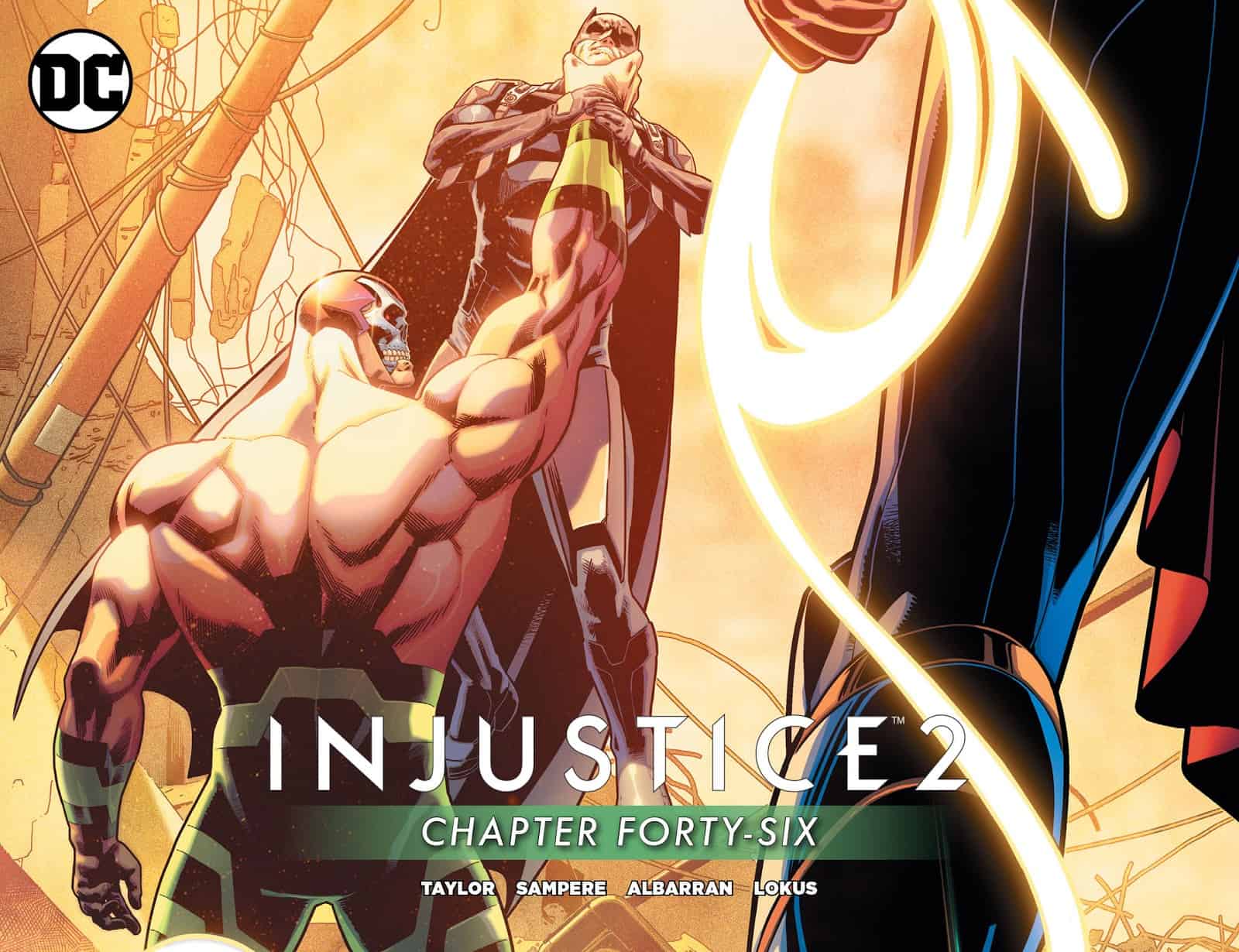 What You Need to Know:
AMAZO has begun his extermination of mankind with the city of Delhi under orders of Ra’s Al Ghul & King Solovar. Batman has gathered all his allies to take the fight to the android. Damian Wayne (Robin) who is in strong opposition to his grandfather’s plan, alerts Wonder Woman & Black Adam to the attack. Now the two sides have joined together to take down AMAZO once and for all.

What You’ll Find Out:
This chapter picks up shortly after where Chapter 45 left off. Wonder Girl is down and Wonder Woman shows some wear from the battle. It shifts to show Ra’s & Solovar marveling at AMAZOs progress despite the heroes interference. Vixen is prepared to attack the pair for how callously they talk about the humans being murdered but Damian convinces her to follow him. Avoiding a failed open revolution like Grodd before them. Vixen & Animal Man are greatly regretting joining Ra’s and being party to the genocide that’s being committed. Damian knows they need a plan but the trio is confronted by Dark Batman who chastises them on their idea. The scene then, surprisingly, transitioned to the Atoms (Ray Palmer & Ryan Choi) as they are appropriately floating amidst atoms. Ray is giving Ryan a speech/lesson about understanding the universe by understanding it’s smallest parts. 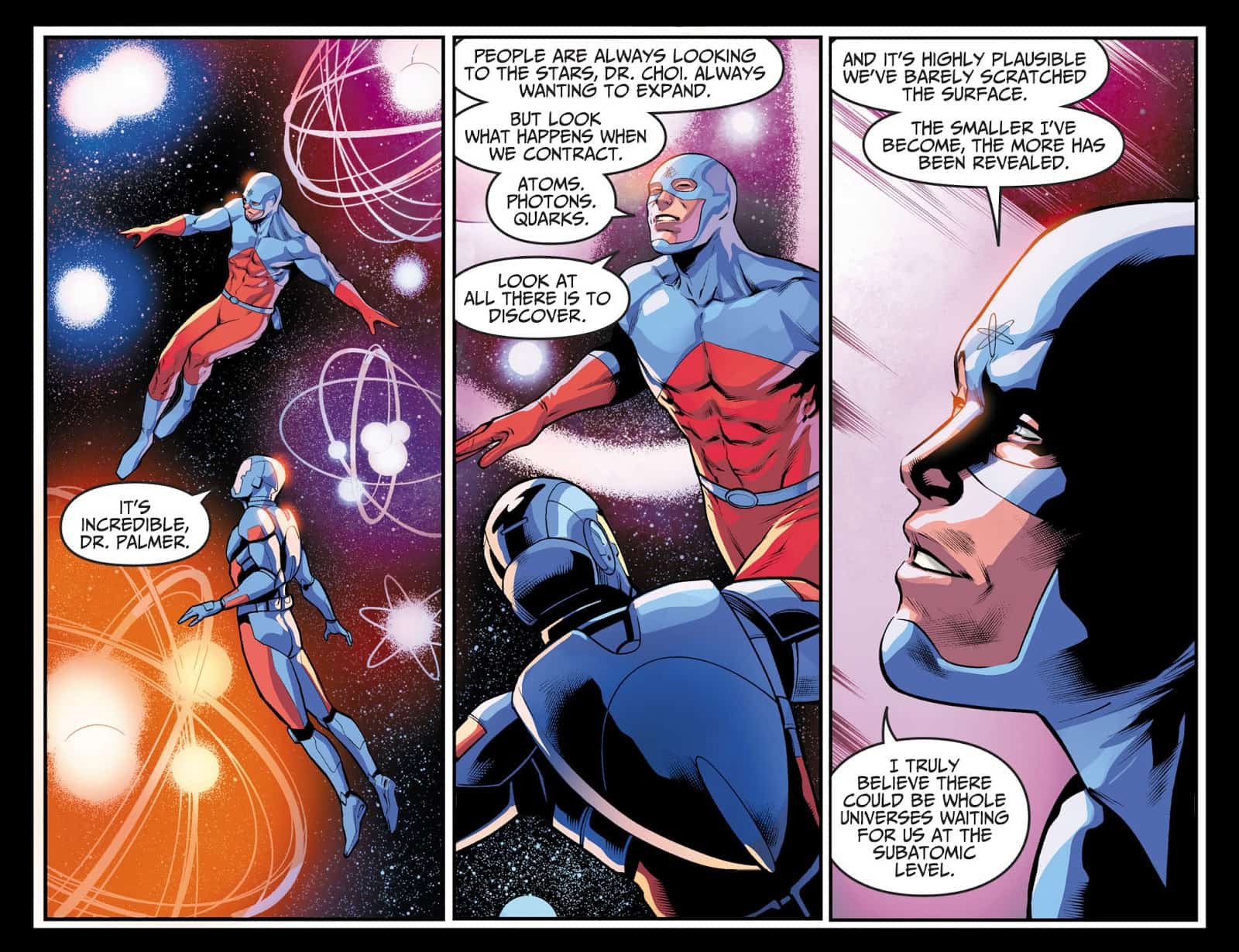 After briefly contemplating the possibility of the Microverse existing, Ray asks Ryan where it all ends. Ryan counters asking what if it doesn’t have an ending. Ray explains that it’s Ryans way of thinking that makes him believe the scientist will consider things Ray never could. Explaining that unlike the days of old, they are both scientists and explorers. But he is unable to go further when his communicator triggers. Back in the normal plane of existence, AMAZO knocks Black Adam out in a single punch after taking one of his thunderbolts without so much as a flinch. Batman tells Atom as he arrives on the scene that AMAZO has the powers of the Justice League and not a single weakness he can find. Atom fills in the blank and shrinks down so he can get inside AMAZOs nose hole while he’s busy taking out Wonder Woman and Superboy. Once inside, Atom is amazed by the android’s brain. But the level of his technological advances was too far beyond what Earth could currently muster. He suggests they repurposed Alien technology as he gazes upon the symbol of Brainiac. Atom prepares to destroy the brain when he realizes he isn’t alone. 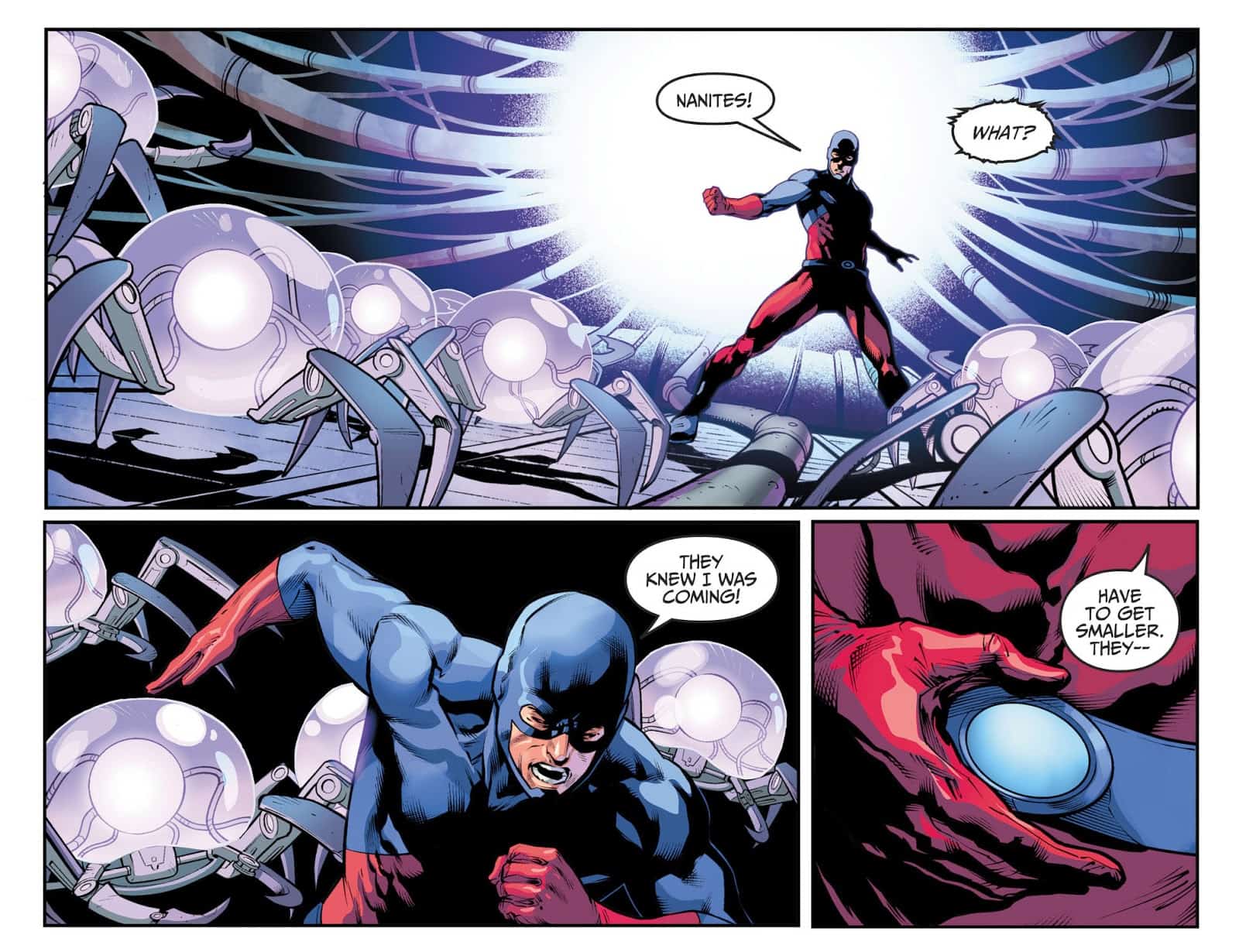 The moment Ray realizes he’s under attack by AMAZO’s nanites, he tries to escape but has his right leg severed. Leaving him at the mercy of the machines. Back in Gorilla City, Vixen & Animal Man are ready to take down Dark Batman. Once more, Damian acts as a mediator and tries to talk down Dark Batman. Damian agrees that mankind has devastated the planet but doesn’t agree with genocide as a means to stop it. Neither Damian nor Dark Batman wants innocent people to die. Dark Batman going so far as to say he just wants the guilty to suffer. Damian then calls Dark Batman out as not being Batman. But he swerves the expected chewing out in says he’s actually better than the real Batman. That he’ll do what needs to be done. He officially asks for Batman and tells him to take off the mask, revealing Jason Todd. 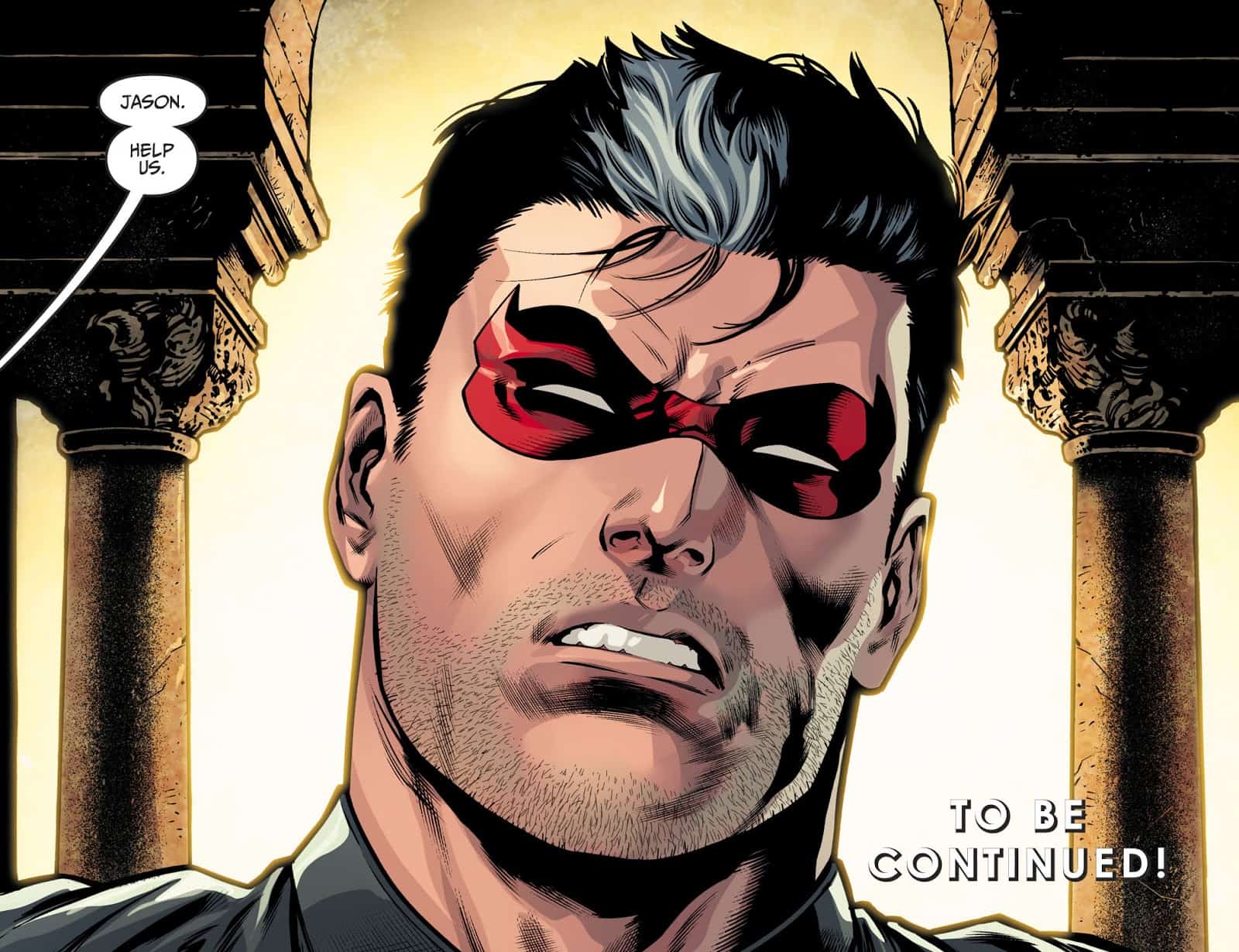 So much for the new trinity, as soon as Injustice gets hope it almost inevitably gets snuffed out. Nobody is a match for AMAZO but now we know why. Brainiac gets a subtle reference which actually makes a lot of sense. Especially with the more alien look of AMAZO but having his face look like a skull rather than a normal face. Both Atoms appearing was also a bit of a surprise. I forgot Ray was still around at this point and didn’t even consider seeing Ryan. Damian being the voice of reason is still a funny but really nice sight. We also finally get the big reveal that Dark Batman is Red Hood. Granted, this was something you could see coming from orbit. Them not focusing heavily on it and making it one of the central mysteries of the series did help save it a bit.

Final Thought: While a bit of a downgrade after the last chapter, this one was still interesting with its own surprises. It fits the tone of the universe to utterly destroy the hope the Trinity brought. But at the same time, you can’t help but see bits of light shine through in the scene with the Atoms. Given all the new changes and depth being created, I’m a bit sad this is still just a prequel.