Earth has a new Lantern, and this one actually earned it. 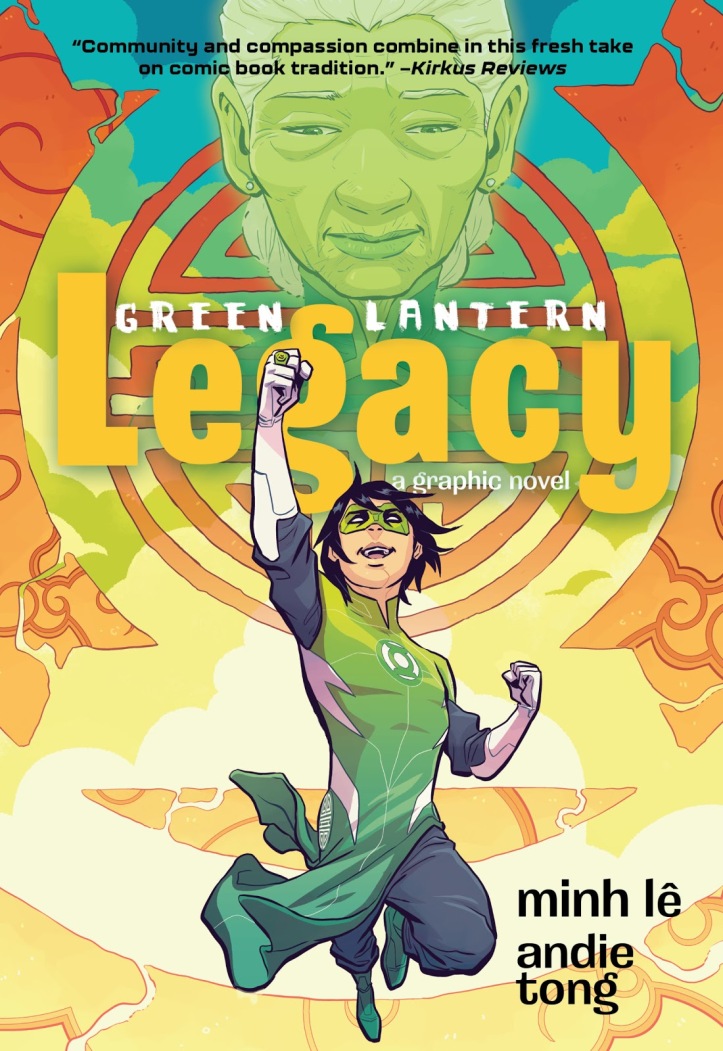 Tai Pham is your average 13-year-old living in Coast City with his family. After the unfortunate passing of his grandmother, Tai discovers there was more to her prized jade ring. That it’s actually a Green Lantern Ring which has chosen him. Welcome to the Green Lantern Corps Tai, hope you survive the experience.

Green Lantern Legacy is a graphic novel starring an all-new character and cast set in Coast City. John Stewart and Iolande are the only two existing DC heroes to appear. But there are smaller things like a flashback of Sinestro, name drop of Bruce Wayne, a poster of Superman, and even a reference to the classic costume of Alan Scott (Green Lantern). So the story as a whole stands on its own without relying on you to having to have kept up with the years upon years of Green Lantern lore. Which fits as Green Lantern Legacy was designed to be for young adults. This also would explain all the little dialogue references to Green.

The story as a whole is an origin story for Tai as the latest and youngest Earthbound Green Lantern. As the name suggests, it’s also about legacy and community. The issue of learning from the past or just starting fresh being an important piece of it. Tai is a likable character and his expressions are just a treat. He’s also an artist like Kyle Rayner meaning when he does take to the battlefield, there’s a lot of visual options. 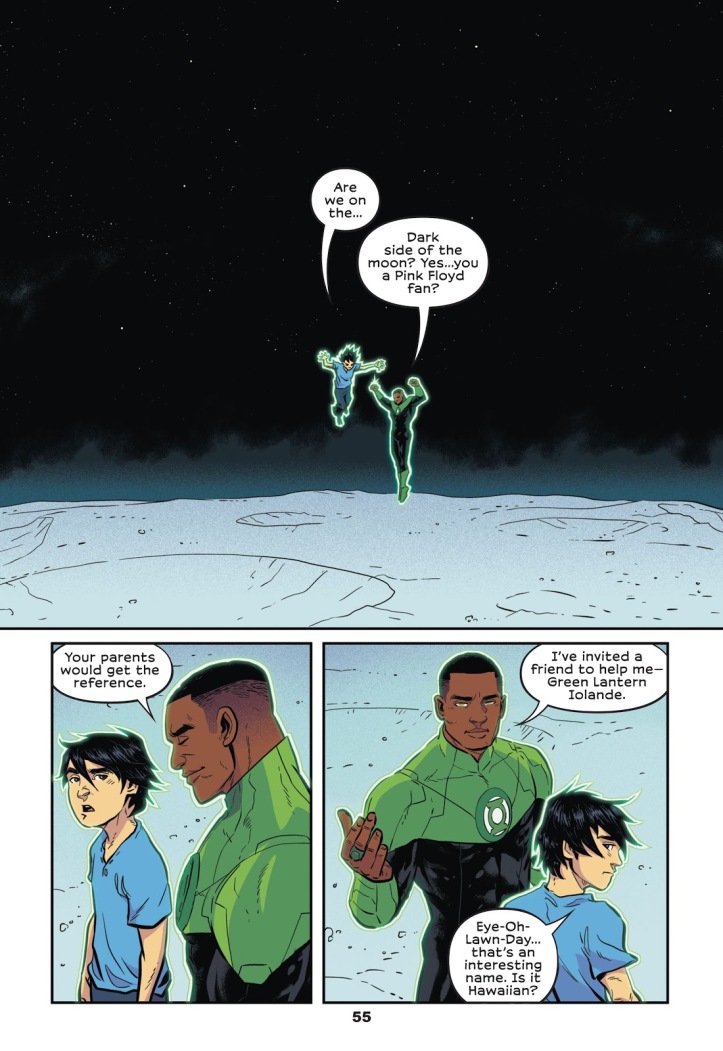 Tai is young and has self-doubts but like any good Green Lantern, eventually overcomes them. The other focal Green Lantern is the person he inherited his ring from, his Grandmother Kim Tran.

She was a Green Lantern during the Vietnam War where she fled to the US with Tai’s Grandfather. Largely keeping her duty as a Green Lantern secret. Seemingly becoming active again in her older years (at the least when John Stewart was active). She comes off as the cool and wiser grandma and served as the pillar for their community which is a focal point of the story. But we’re mostly told these things than actually being shown. It’s shown and implied they have dealt with racists from time to time but it’s not a hugely direct part of the plot. More acting as a backstory fact to her and her family as well as an explanation for why Tai inherited her ring. Even then, it comes off as just being the same three people who were just never caught or stopped.

Now, I do have a bit of a mixed feeling on Kim. The story suggests that she was a huge threat and annoyance to Sinestro and spent a lot of time working with John. It never explicitly references Hal Jordan and time is a sliding scale in comics/graphic novels. So does this mean whenever Hal wasn’t around she was the main one facing him? I can see her fitting in because of this sliding scale and having been active for years. As well as her not appearing due to her old age and simply hiding her powers from her family. It’s just a bit odd. Then again, this also isn’t the first time a Green Lantern has appeared on Earth and flew under the radar…

His main supporting characters are his friends Tommy & Serena. Both are likable and have silly banter together. Actually acting like kids when together, something that isn’t always captured right in comics or graphic novels. His family also appears but they don’t get much screentime. They’re fairly standard so I can’t really complain. Maybe they’ll get fleshed out later?

A hero is only as good as its villain and Xander Griffin is an okay one. He’s the first fulltime Earthling Sinestro Corpsmen. While he shares Sinestro’s values he’s not a full-blown extremist. Being likable at first but willing to resort to murder once you deny him. Being a totally new character like Tai & Kim, he has room to grow and show more of his depth overtime.

The art feels best described as standard comic book art. It fits right in with the general art style seen at DC rather than a more simplistic Indie style. The colors are not so dull it looks too realistic. Leaving the Green Lantern & Sinestro Corpsmen costumes as the main points of vibrancy.

While you see the label of “young adult” right out the gate, Green Lantern Legacy is a good entry in the franchise for all ages. For new fans, it’s a good hopping on point. For the old fans, we get a new member of the Corps. Tai is a great addition to the Green Lantern Corps with a lot of potential. Same for Xander, both of which I hope we see more of in the future. Rather than doing the most common tactic of race swapping or trying to hard sell him, Tai actually is capable of standing on his own. Not taking away from any of the other existing Earth Lanterns to do so. His race is important but not all there was to his character. Nor does the story remind you of it every other scene. There is a small bit of social commentary but the story comes first and it’s handled well the four times it pops up. A welcome change from the hamfisted style that’s become commonplace where the story is secondary.

If you like Green Lantern or want to get into the team, you’re very likely to enjoy this.

If you want to check out Green Lantern Legacy, check out Amazon.com for the options. Including getting it digitally on Kindle & comiXology, Paperback, or pre-order the Hardcover which will release February 4th, 2020.