While on her search for Yoko, Cyan has been captured. Will Spawn be able to find her and Yoko before they join the many ghosts of Japan? 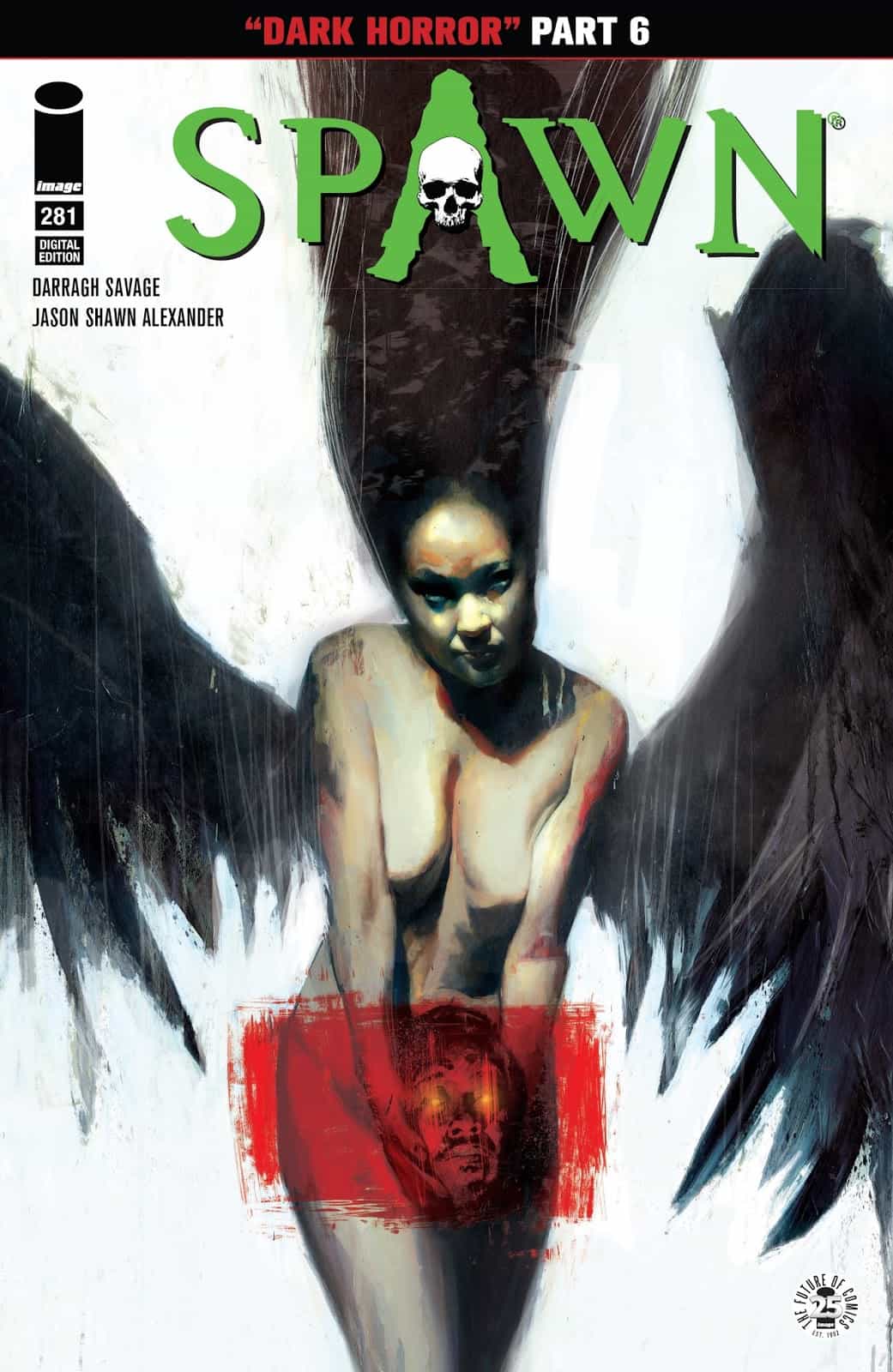 What You Need to Know:
Once again, Spawns family is in danger. Cyan has begun being targeted by the forces of Heaven & Hell so to protect her he spirits her away to Japan. But his efforts are in vain as the native Demons of Japan attack them repeatedly. After her sponsor family is captured, Cyan uses her newly found powers to try and locate her. But in her overzealousness, she passes out at the worst opportunity. Resulting in her own capture…

What You’ll Find Out:
The chapter begins with a classic Spawn narration recounting the earlier events of the Dark Horror arc while the panels follow Tamura. Spawn knows that he made a mistake trying to just hade Cyan from the Demons & Angels that plagued him. That her newly blossoming powers would draw much-unwanted attention and make her a target. A fact that proved too as his plan to hide her in Japan did nothing to stop her from being attacked shortly after arriving. The narration continues to elaborate some details we weren’t fully aware of. It explains that Cyan was captured by Tamura. That the drug they made was actually secreted from a massive creature used to control Humans. The liquid itself was created by the creature devouring youthful and innocent souls. Their purity making the drug all the more powerful and all the more difficult to obtain. 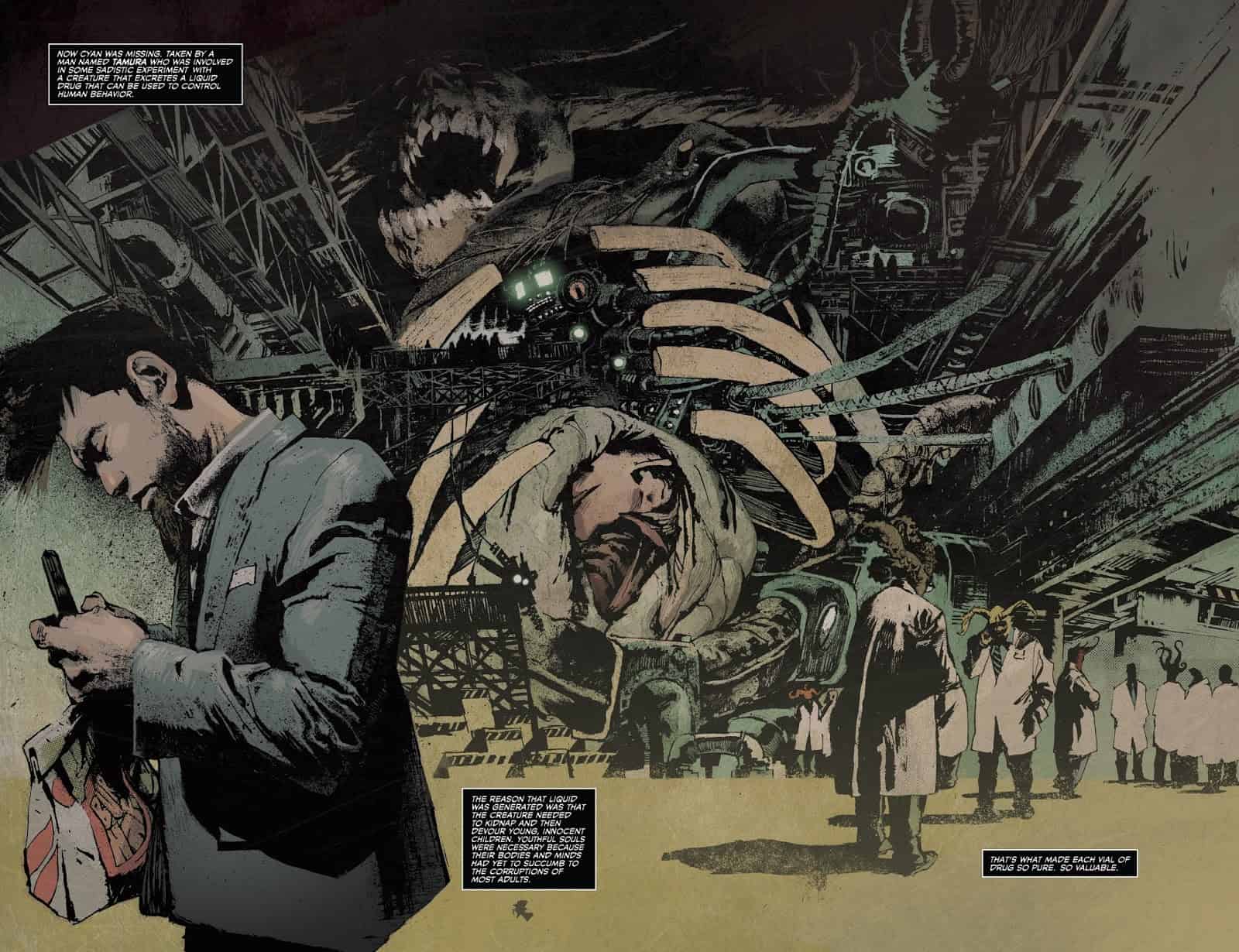 The narration ends as Tamura continues through a facility and delivers Cyan lunch. She refuses to eat but Tamura says it’s just for her host, likely referring to the beast from earlier. The Crow Demon returns and reminds him Spawn will come for her. He knows this fact already and asks if she’ll be able to stop the Hellspawn. To his annoyance, she says that Spawn’s powers are different from what she heard about. The scene shifts to Spawn who perched atop a fifty story building with his cape blowing majestically like always. He briefly explains to the audience that he was scrying for Cyan and that this was what he used to track another young girl several days ago. That he began his search for Cyan after her father Terry, called about getting off the plane after boarding and was missing. He tried to lie to his sometimes best friend but decided to be proactive and began a five-hour scrying to locate the young girl. The process doesn’t give a precise location, but it reveals to Spawn she’s alive and the general direction he should head in. The scene transitions once more back to Cyan as she’s visited by the ghost of a young boy. Cyan is surprised he can speak but he explains only some can and that the girl who brought her was constantly screaming. This eventually led to her being forcibly made unable to speak. The pair continues to talk and he explains his origins. He says his name is Sadaharu and after he was captured they kept feeding him drugs on top of food and water for survival. That his death was painless and he misses his mom and dad and wishes they would come save him. Cueing the scene turning to Spawn doing just that for Cyan. 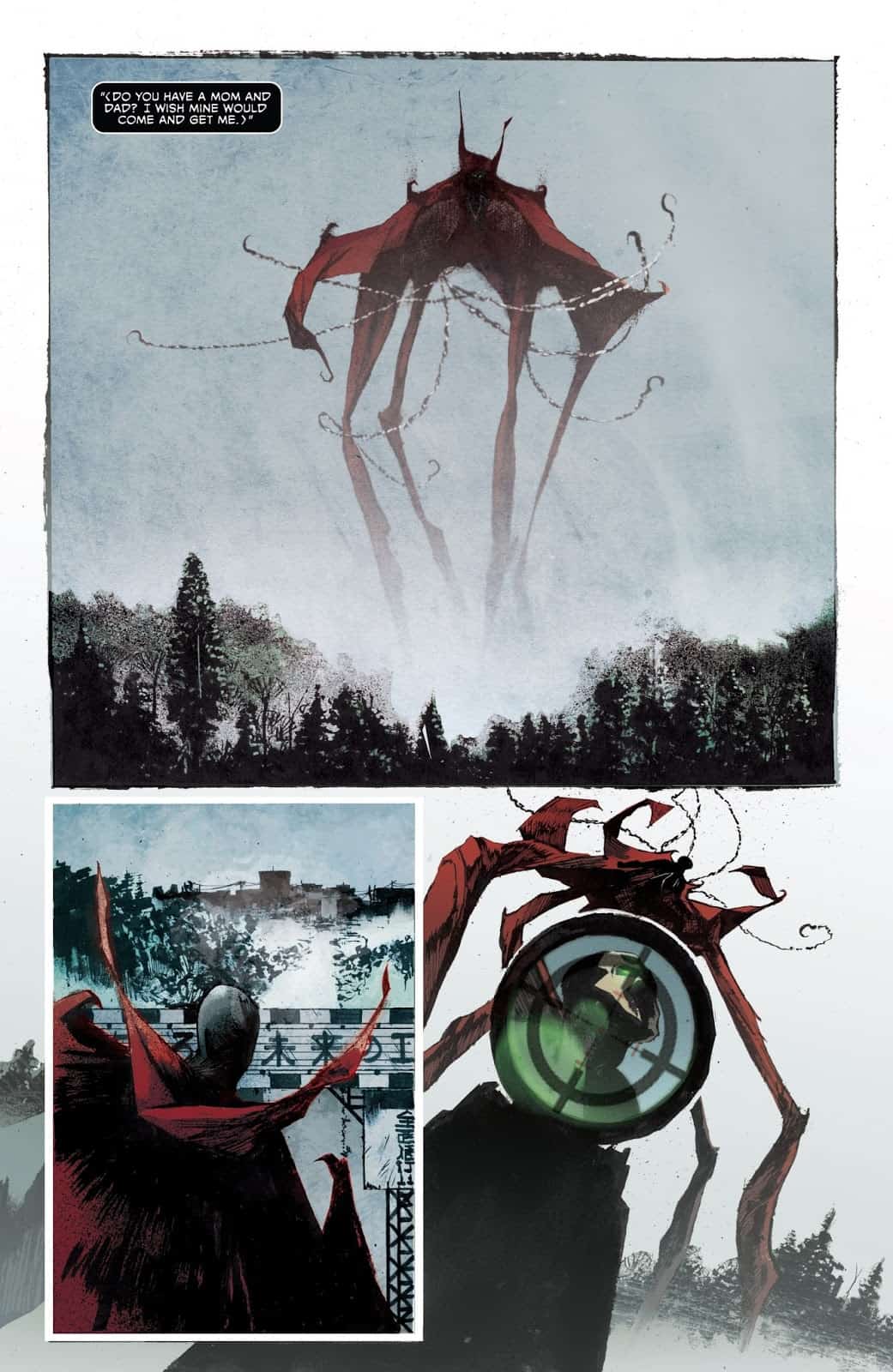 Spawn arrives at the factory and is shot off of his massive cape walker. The shooter greets him as one of a group of overweight Demon Imps jumps on Spawn and explodes immediately upon impact. Each of them is a living bomb and continuing piling onto Spawn, exploding one after another. But Spawn didn’t care, he wanted to find them to catch him in the first place. The Crow Demon, now in her human form, tries to use this opportunity to shoot Spawn but he disappears. The pair briefly fights but Spawn flees into the facility where Cyan awaits. She taunts Spawn and forces him to flee, leaving Cyan defenseless. Cyan tries to get the Crow Demon to spare her but she doesn’t listen and gets beheaded. But the head transforms to reveal she actually killed Tamura. 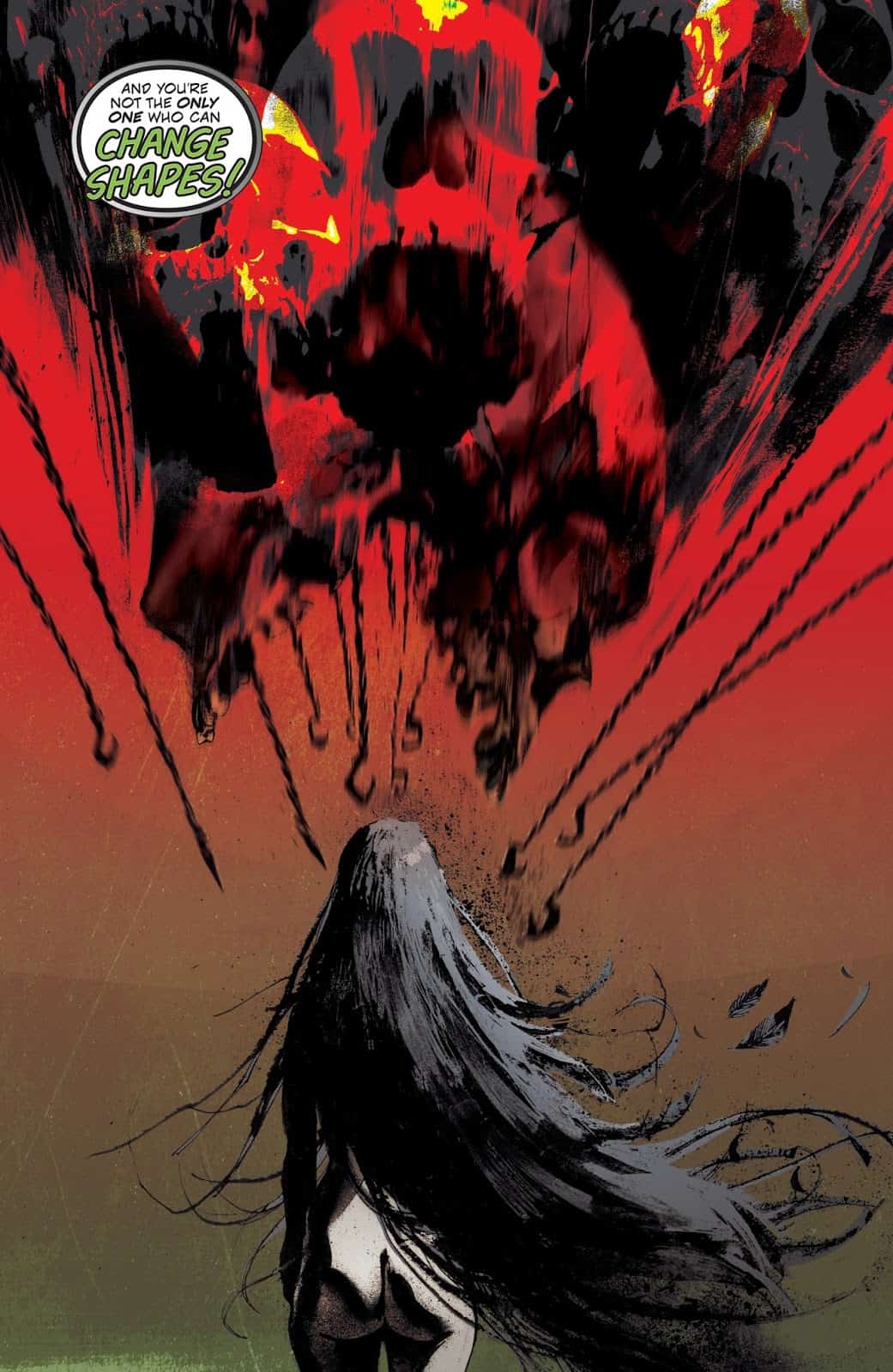 The Crow Demon is surprised but Spawn explains she isn’t the only one who can use magic or shapeshift before promptly eviscerating her with his chains. The real Cyan tries to break free of her prison when she’s visited by Yoko’s ghost. This devastates Cyan as Spawn continues searching for Cyan or the person in charge of the facility. There’s a juxtaposition of the two scenes as Spawn locates the leader, a man clad in a red garb much like his own and Yoko tells Cyan the process will be painless. Cyans resolve is steeled to kill every last Demon as Spawn is startled by the leader suddenly becoming a truly towering figure taller than the building itself… 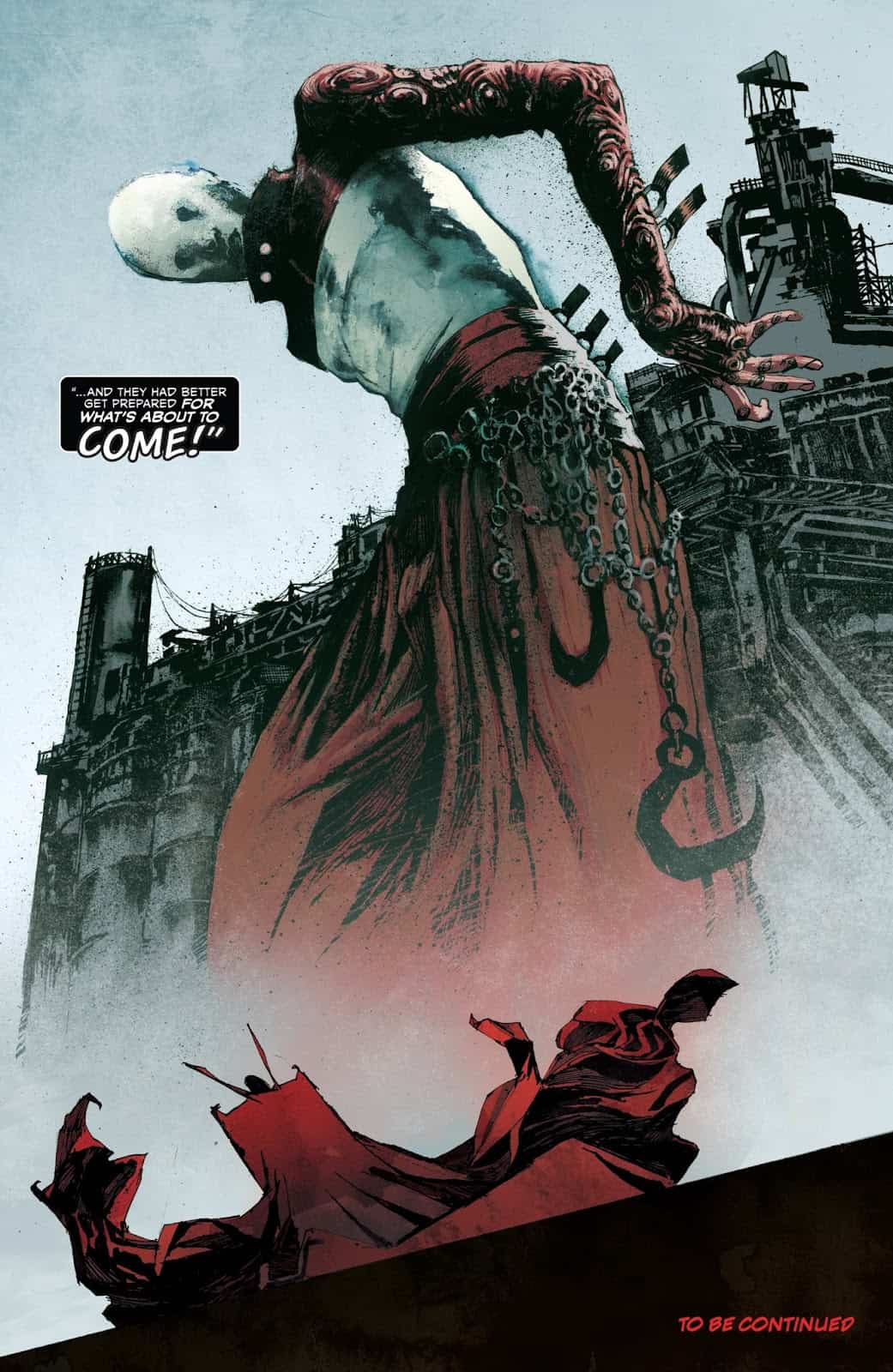 What Just Happened?
We now know more about the process used to make the Drug plaguing Japan. Not only that, the Crow Demon has finally been killed in a rather gruesome fashion. Unfortunately, both Cyan and Spawn are too late to save Yoko. Leaving only Yoko’s younger brother alive. He may have been late but all of Spawn’s efforts finally seem to pay off. Now only the leader of this gang remains between him and Cyan.

Final Thought: I thought it was a nice chapter that reminded me somewhat of the older Spawn chapters with the walls of narration. It did help fill in some blanks about the drug and what actually happened to the kids to make them into ghosts. It was also good to see Spawn finally back to using magic. For a while when his powers were waning he just relied on his chains or guns. But now that he’s getting back to form I’m definitely excited to see him return to using magic. It’ll be especially useful against the new gigantic gang leader.